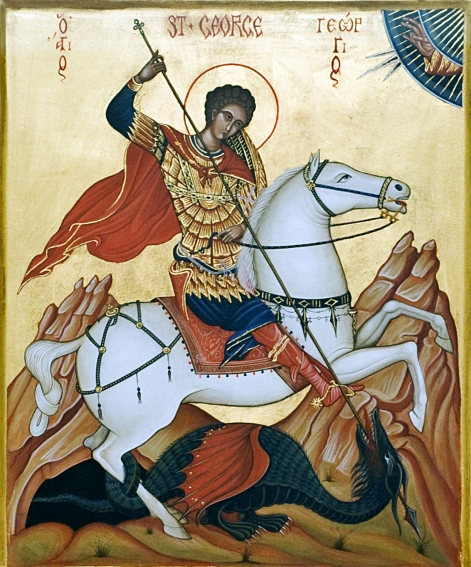 As you stand next to the Saint George Hotel, facing the Saint George Bay, looking far onto the Mediterranean Sea, a legend centuries ago of bravery, love, and chivalry took place. Its story travelled with the Crusaders and was retold with the courtly appurtenances belonging to the genre of Romance. This Story is of a Roman soldier named George.

On May 6th (April 23rd by the old calendar) one of the greatest saints of the Christian Church is commemorated, Saint George the Great Martyr. St. George served in the Roman army of Emperor Diocletian (284-305 A.D.), and for his bravery in battle the Emperor awarded him great honors and a high military rank. However, when Diocletian embarked upon a harsh persecution of Christians, St. George, who had been raised a Christian from childhood, bravely stood before the Emperor and confessed his faith in Jesus Christ. The Emperor ordered St. George to be extensively and severely tortured, which he bore with courage and humble prayer to God. For this, it is said, that the Lord healed his wounds, so that after every torture the saint again appeared whole and sound.

This and other miracles caused many people to believe in Christ. When even the Emperor’s wife, Queen Alexandra, confessed her belief in Christ, Diocletian ordered St. George to be beheaded. Even after his death the holy martyr performed many miracles. One of his greatest miracles was the deliverance of the inhabitants of the city of Beirut from a fierce dragon. This terrible monster lived in a lake near Beirut, not far from the mountains of Lebanon. Emerging from the lake, the monster abducted many people and devoured them. The inhabitants of the city, who were idol-worshippers, armed themselves many times and battled the dragon, but the latter filled the air with the fumes of his poisonous breath, from which many people died. Finally the people of Beirut came to their king and asked him for help. The king promised to find out the will of the gods. He turned to the idols, but the demons who lived inside these idols, wishing to destroy the people, incited the king to announce the following: every day the inhabitants of Beirut must draw lots and feed one of their children to the dragon; and the king agreed, when his turn came, to give up his daughter too.

And so it was that every day the people of Beirut drew lots and, dressing up one of their sons or daughters in their best clothes, would take them to the lake and leave them to be devoured by the dragon. When the king’s turn finally came, he was forced to give up his daughter, although he wept and grieved for her, since she was his only child. The princess was dressed up too, and left at the usual place on the shores of the lake. But at that moment, by God’s providence, which desired to save the inhabitants of Beirut from both physical and spiritual destruction, the Great-martyr St. George, carrying a spear, rode up on his horse. The terrified princess begged him to leave immediately, so that he would not perish, but when he learned of the dragon, St. George promised her that he would save her in the Lord’s name.

At that moment the terrible monster emerged from the lake and approached his victim. The princess screamed, while St. George, making the sign of the cross and rattling his spear, rushed at the dragon, struck his throat with great force and pinned him to the ground. Then St. George ordered the princess to tie up the dragon with her sash and lead the now submissive monster into the city. After-wards St. George killed the dragon with his sword in the middle of town. Seeing such a miracle, all the inhabitants of the city came to believe in Christ, and 25,000 people were baptized at that time, not counting women and children.

St. George is also greatly venerated as a patron saint of agriculture and protector of flocks and shepherds, because the saint often provided help, appearing on his white horse. Also, on the basis of the miracle with the dragon, the image of St. George was incorporated into the Russian imperial coat-of-arms as a symbol of victory, and was also made into a special medal with which Russian Orthodox soldiers were decorated for valor in combat, since from ancient times St. George was venerated in Russia as the heavenly protector of princes and soldiers.

He is patron saint not only of Beirut but also of England, Aragon, Catalonia, Georgia, Lithuania, Palestine, Portugal, Germany and Greece; and of Moscow, Istanbul, Genoa and Venice (second to Saint Mark). He’s also patron saint of soldiers, archers, cavalry and chivalry, farmers and field workers, riders and saddlers, and he helps those suffering from leprosy, plague and syphilis. In recent years he has been adopted as patron saint of Scouts.

The Saint George Bay in Beirut is believed to be the place where the dragon lived and where it was slain. It is believed that Saint George had cleaned off his spear at a massive rocky cave running into the hillside and overlooking the beautiful Jounieh Bay. Others argue it is at the Bay of Tabarja. The waters of both caves are believed to have miraculous powers for healing ailing children.

The 20-foot square well from which the dragon periodically arose stands on the northern edge of the city. Now it forms the center of a Muslim primary school playground, but it is paved over because the teachers were afraid the children would fall in. And the pupils are not told about the dragon lest they have nightmares. Next to the school lies the site of the slaying. The Crusaders built a chapel over the spot, but since 1661 it has alternated between chapel and mosque. Today, the yard-and-a-half thick walls that formed the tower support a modern minaret. In itself this would hardly hurt St. George’s image. Some Muslims believe in him just as Christians do, linking the saint with an ancient, mystical warrior named al-Khadr. But progress ordained a noisy garage be built and now completely masks the mosque. The locals say that the pilgrims of 10 or 15 years ago no longer come.

The spot where George is supposed to have cleaned off his spear, about 30 minutes drive north from the slaying site, has fared better. It is a massive rocky cave running into the hillside and overlooking the beautiful Jounieh Bay. The knee-deep waters within the cave are believed to have miraculous powers for fattening ailing children.

On St. George’s Day, candles burn in smoke-blackened niches in the rock face beneath an inset marble plaque of the saint. The massed yellow daisies that herald a Lebanese spring cover the open ground around. Mothers with crying babies hurry down the hillside steps from waiting taxis. They dip the infants into the icy water, light a votive candle and place the babies’ old clothes on a ledge. These must be left behind for the cure to work.

An ancient gilded icon of St. George at the Greek Orthodox Cathedral in Beirut has been a major attraction for Greek Orthodox, Copts, Catholics, Maronites and some Muslims, for many centuries.

Mothers used to croon their babies to sleep in Lebanon with such songs as:

“They tell us hills and hills of praises about his generosity.

“His mother died and he lived an orphan in Beirut. A dragon appeared,

“His breath killed any human being …”

The song tells how St. George killed the dragon and rescued the princess who was about to be its sacrifice. Although the folk songs eulogize the dragon-slayer, St. George has fallen on hard times in this city.

Where are you, O valiant knight, riding on your quest, capturing your deadly foe with
your metal for to test? With a bow and a kiss he wiped the blood from his lips and you have to admit it was grandeur. And all the walls we built and empires we buried in the dust believe in the patron saint that slayed his dragon on the shores of our ancient city of Beirut.

let us not leave the dragon where it fell… 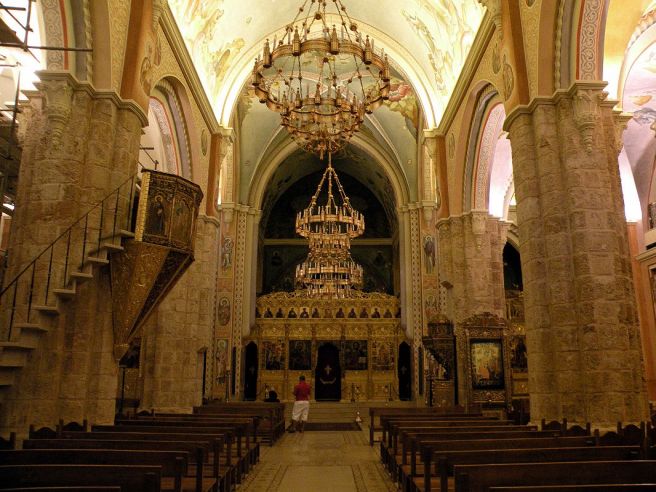 One thought on “The Patron Saint of Beirut”