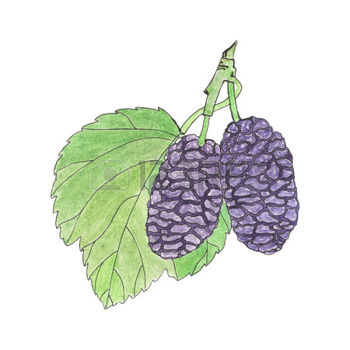 “O, the mulberry tree is of trees the queen! Bare long after the rest are green; but as time steals onwards, while none perceives slowly she clothes herself with leaves.”

Mulberry trees grew all over us as we were growing up. A ruby red berry fed us then and still does. To savor its taste, one holds it in between his fingers, when the mulberries bleed in your mouth is when its taste explodes hinting spring flavors of sweetness and tartness, all very irresistible.

I tend to start the season with eating the ones that make it home looking best fresh and freezing the rest of each haul, stockpiling until the end of the season and having a couple of big sessions of making jams. They appear on the market in shades from milky white to almost black, as their season runs from end of May till end of August.

Mulberries are very high in Vitamin C, reasonably good for iron, potassium and Vitamin K, plus they’ll give you a little fiber, too. Mulberries are also high in resveratrol, the substance present in red wine that experts say helps fight cancer.  But who eats berries for the vitamins?

In Lebanon we create many things out of our red luscious spring fruit, “toot,” as we call them. We have sharab el toot (mulberry cordial), toot ice cream (a wonderful full on mulberry flavor sorbet), mulberry jam, and mulberry molasses, which taste of a rich dark berry essence.

Mulberries don’t all ripen at once, and they ripen from a light crimson to a deep purple with reddish undertones. Mulberries are always redder than blackberries. Like everything in Lebanon, if you dig just a little deeper into its surface, you will discover that it has another story just waiting to be discovered. Mulberries were grown in large numbers in Lebanon for leaves feeding silk worms and thence a silk trade to France. The silk trade may have faded, but not the love of the second crop, the berries themselves.

Silk production in Lebanon goes back to the Middle Ages. Up to the 1950’s, sericulture, or the rearing of silkworm and the production of silk, was widely practiced in Mount Lebanon and the West Bekaa. Following the civil war, and after the introduction of “nylon”, sericulture ceased which lead to a decline in mulberry cultivation.

The mulberry season was locally known as the season of prosperity, since traditional silk weaving was an important economic activity. Mulberry trees, also known as the golden trees, were grown for their leaves, which were essential food for silk worms. Silk was already a booming business before the Romans got to this part of the world, but it was imported from the Chinese to make the famous purple colored silk. Emperor Justinian the Great (537-564 AD) figured that what the Chinese could do, we could do better (if only that holds true today!), and mulberry trees were cultivated. For quite some time it was a booming business.

With the dawn of the nineteen-hundreds, the growing of mulberry trees began to decline because of the competition of the Far East on the silk market. The mulberry trees were replaced by citrus on the coast and by tobacco, vines and fruit trees in the mountainous regions.

With time and patience the mulberry leaf becomes a silk gown

Here is my toot sorbet recipe:

This recipe makes a smooth, deep purple sorbet sexed up a bit by the addition of a little liqueur. I make this sorbet with wild mulberries from a tree near my house, but blackberries would be just as good, as would black raspberries.

As for the liqueur, try to find cassis, which is made from blackberries. You also could use Port wine.