Have you ever stopped to stare at the trees?  How they lightly sway in the gentle breeze?  They withstand with such grace their consistent fate.

Standing straight, humbled by their state, I watched as the trees changed. Bright green leaves morphed into beautiful yellows, reds, and oranges. As they began to shed their beauty, it felt like everything beautiful had fallen and all that remained were the branches and the roots. And still without all those leaves, I saw something beautiful. I saw raw nature. I saw life.

Nature in all its splendor and fascination is truly exalting, for those who seek and venerate it, love and cherish it.

Born in Lebanon, Nabil Nahas spent his formative years in Cairo and Beirut. He attended university in the USA, earning a BFA from Louisiana State University in 1971 and an MFA from Yale University in 1973. Nahas currently lives and works in New York but still spends significant amounts of time in Lebanon. He has exhibited extensively in the USA and abroad over the last three decades. His first major museum retrospective was held at the Beirut Exhibition Center in 2010. Public collections include The Metropolitan Museum of Art, New York; Tate, London; and the British Museum, London, amongst other international institutions. In 2013, Nahas was awarded the National Order of the Cedar for services to Lebanese culture, an honor rarely bestowed to visual artists.

Nahas’ paintings make use of geometric motifs and decorative patterns inspired by the world that surrounds him. Nahas also employs traditional Western abstract painting, pointillistic and impressionistic techniques. Sometimes combining these traditions in brightly colored paintings, suggestive of the richness of nature and of the imagination like his starfish motifs cast in acrylic paint, on top of which he layers high-chroma acrylic paint.

This world of his where the macro and the micro universe are joined to create an illusive body of work, is a world of pure mysticism. In his 3 dimensional starfish paintings, these floral like deep hues of blues shapes gilded in gold and rich green seem hypnotizing, calling one’s eye deeper and deeper into this micro world within a world. The pumice he uses in his paintings, which is very absorbent, gives the paint the look of dry pigment and the illusion of fragility, while it juxtaposes with the rigidity of the surface of his work.

In his world, like his art, everything he is surrounded with is ultimately related. His larger then life starfish convert art into a microcosm of reality, where the sheer beauty and color of his work is brought to life in depth and layers.

In his most recent work with direct reference to his native land, Nahas introduces the recognizable Lebanese cedar, pine and olive trees. These tree paintings are much more rooted in his childhood memories. In them he reclaims the pleasure of freely running a brush on the canvas, where his emotions, just like his brush, run wild. They twist, bend, and turn. They scream and fall silent under the weight of their own trunks. They live and they survive. These trees (the date, the palm tree, the cedar, and the olive tree) that are so quintessentially of this land have all been celebrated since antiquity as a true measure of life itself. Yet again in his paintings, they are celebrated as obelisks of life, survival, and strength.

In one of his interviews Nabil once said:

“maybe the cedar trees are tragic but that is in keeping with their troubled history. On the other hand, the palm trees are serene and the majestic olive trees are silent witnesses from Biblical times.

For thousands of years, Lebanon was always attacked, it was always occupied, and the trees were hacked down, the cedars. The first thing a conqueror would do was burn all the forests down. You know, I’m a good gardener. I like botany. I like integrating Lebanese flowers—hollyhocks, pink laurels, cactus plants, and poppies. I like to mix different flora in the paintings—some trees are two to three thousand years old, and poppies will only last a day or two.

I left in 1968 before the civil war, which I watched the civil war unfold on my TV screen in New York. When I look back at history I see the fate of this country unchanged for thousands of years—a geographical miracle and a strategic curse. It’s been rising from its ashes over and over and over again for millenniums and that seems to be its fate.” (interview for bomb magazine)

In 2016 a major exhibition celebrating 50 years of his paintings while inaugurating the Saleh Barakat Gallery in Beirut took place in parallel with a monograph of his career published by Rizzoli, one of the most prestigious art publishers in the world.

Ranging widely from densely textured works on canvas formed with layers of an acrylic and pumice mixture to abstract representations of the native olive and cedar trees of Lebanon, Nahas’s work consistently oscillates between many aesthetic sensibilities, ultimately driven by his almost religious passion for abstraction and the nature that surrounds him.

In his world, one is driven to look into the utter artistic aesthetic of this world above and beyond us. Inspired by Etel Adnan’s book Seasons, he once used this excerpt from her book:

“What is this place we call sky, that recedes when we fly the way the horizon does when we sail? To see is to think.” 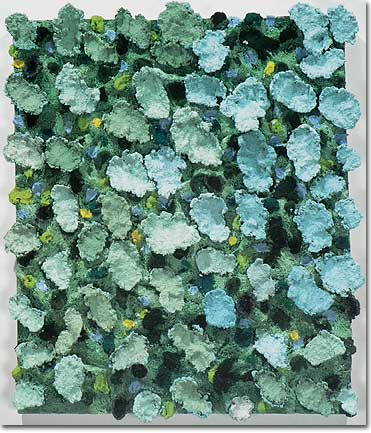 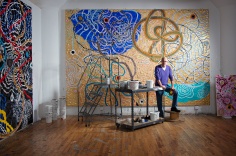 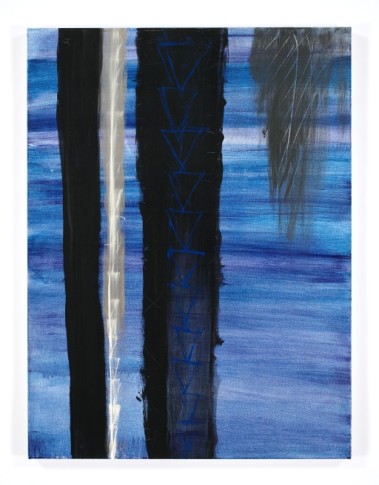 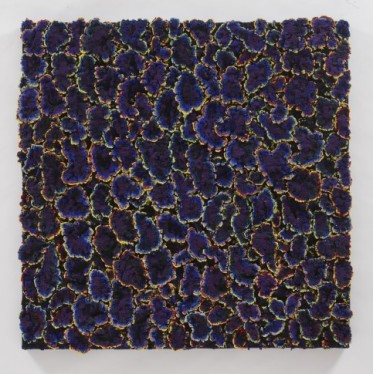 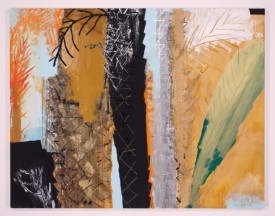 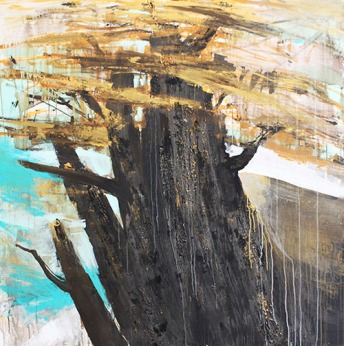 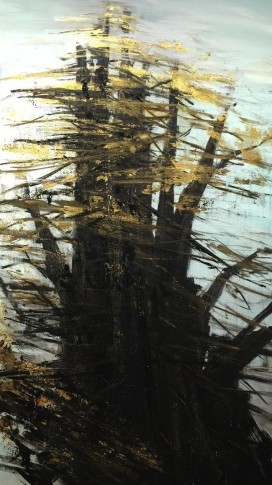 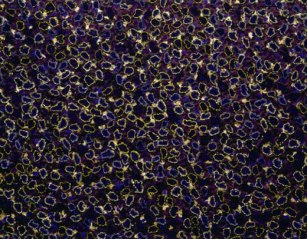