Lazy afternoon rays shaft through spring’s full trees. The wind cuts laterally leaving the sea. Through deck lattice, the grass weaves a tartan plaid. Electric lines, old stone two stories houses, and blossoming crops create a setting where weavers weave as their fingers entwine baskets to collect what is left from our land.

The ancient craft of basket weaving, along with platters and prayer mats, has been practiced in Lebanon’s rural villages for centuries. Two main components, reeds and palm leaves, are skillfully interlaced and shaped into the required receptacles. The reeds, found growing along the banks of most of Lebanon’s rivers, are mainly formed into fruit and vegetable baskets; while the palm fronds are woven into prayer mats or fishing baskets. Sometimes the reeds are woven into vessels of varied colors or into large trays.

The main wickerwork centers are found along the coastal line of the Lebanese territory, and in some mountain villages like Zghorta, Kefraya, Baysour and Majdalaya.

Initially, this craft developed to answer domestic needs and did not constitute a trade of any kind. Wicker workers mainly manufactured straw mats used in the mountains to protect wooden floors or cover flower pergolas in the summer. These mats were traditionally of one or two colors. Straw was also used to manufacture big dishes, fruit baskets, sewing boxes, and bags, as well as chairs. All these items were decorated with traditional geometrical designs. As for wicker, it was used to manufacture baskets in different sizes and large deep dishes in which farmers carried their fruits and vegetables.

Near Jbeil, in Amchit, wicker workers have developed the craft of palm weaving to produce caps, baskets and flowerpot baskets. In Kouachra, 3 km from the northern frontier, halfah or esparto grass, is used to manufacture multicolored mats and large trays. While in the village of Hermel, 58 km of Baalbek, workshops weave praying rugs with colored corn straw. Finally, coastal villages like Zghorta and Helweh in the north, Kefraya and Sidon in the south, are specialized in rougher braded cane or wicker with which they manufacture large baskets for the transportation of fruits. Alongside the basketry work, skilled craftsmen use the vegetal products to weave chair backs and seats.

There’s a distinct nostalgia attached to traditional Lebanese hand-woven basket crafts, which are often seen piled up on the roadside for sale along the coastal roads of the country. In Saida or Tyre they have a direct connection to the sea, where they have a strong presence in the harbor and are filled with fishing nets or used to carry the morning’s fish. In rural parts, these rustic baskets were used to carry figs, olives, citrus fruits during harvesting season, or flat woven circular mats were used to dry keshik on the roofs of houses in mountain villages.

In the old neighborhoods of Beirut baskets still dangle down from the high balconies of crumbling heritage buildings awaiting the shop owner’s goods.

Aamchit developed its own version of basket weaving using palm leaves, a softer more delicate technique that is a time-consuming art, made entirely by hand. It can take hours to prepare, and weaving the leaves is a way of passing the time, which is why it was once a common tradition in these slow-moving sleepy seafront communities.

Some believe the tradition of basket weaving in Aamchit stretches back to the 19th Century. The people of Aamchit were traders; they would travel across the region from Iraq and Syria to Egypt and trade in dates and the oriental ghee (samneh). They brought back with them the art of weaving from Basrah, in Southern Iraq. Since the horizon in Amchit was full of palm trees, it was natural for this art to begin.

The palm weaving of Aamchit is unique for its simplicity. First the palm leaves are dried before being cut and prepared. Next they are woven and sewn together, depending on the shape. Their weaving technique today is still very similar to Iraq and Syria.

In general, there is a careful process for transforming the cane into baskets, in regions such as Saida, which begins long before they sit down to weave. Firstly they bring the cane strips that are found on riverbanks (they only grow in the wet grounds during February) and stack them next to the house. When the canes are green, it becomes easier to divide them into thin shoots for interlacing. With the start of summer, the cane dries, and the production process becomes more involved. The cane is soaked for several weeks in order to rehydrate it and render it pliable. They then start building them step-by-step from the base on up.

Gathering harvest in cane baskets, rather than plastic, protects the fruits, especially oranges and loquats as they preserve the fruits and vegetables better by letting air in. In the past, people used to carry their produce on donkeys in cane baskets.

The weavers gather the sunlight of the Mediterranean sky and with it they weave a baskets of many shapes and sizes. This interlacing story of patience, creativity and love is a treasured gift to hide inside what remains of our coastal and rural traditions, away from time and decline.

(the information of Amchit weaving is taken from Lebanon traveler website) 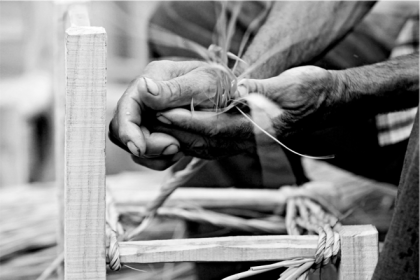