Funeral rites were one of the major types of religious cultic activity among the Phoenicians. It appears that burial of an intact body was the preferred method for dealing with the dead, though some examples of cremation have also been found. The wealthiest Phoenicians and members of royal families received elaborately decorated stone sarcophagi, which were placed in tombs cut directly out of rock. The bodies were typically given objects from their lives to accompany them: coins, food, cosmetics, toiletries, figurines, and so forth. The inclusion of both ritual and practical objects is often cited as evidence of belief in some sort of afterlife, possibly one in which the deceased could make use of these objects. This may be a case where the funeral rites of Egypt influenced the religious beliefs of the Phoenicians as for a long time.

The tomb of Ahiram was hailed as one of the most exciting finds by Semitic scholars, the tomb now in the national museum of Beirut, is widely accepted to be from around 1000 B.C. When the tomb was discovered by the French archaeologist Pierre Montet, it soon became apparent that it was an important link to early Bronze-age Phoenician history. The sarcophagus was found following a landslide in the cliffs surrounding Byblos in late 1923, which revealed a number of Phoenician royal tombs. The tomb of Ahirom was ten meters deep. The town of Byblos is considered to be one of the oldest constantly inhabited towns in the world. Its kings, at times, standing toe to toe with the pharaohs of Egypt.

The city kingdom of Byblos was a key-trading nation in the Mediterranean, the Phoenician wealth of Cedar wood provided a well-used and important resource for timber poor Egypt. This trade is exemplified by a report by an Egyptian trader, called the report of Wenamun. The report tells of a difficult journey made by the trader, on the way from Egypt, Wenamun is robbed and on his arrival at Byblos, the king says that his gifts are not good enough. Wenamun has to return to Egypt to bring back more gifts for the king of Byblos in order to complete his mission for wood (most likely Cedar wood).

“Coffin which Ittobaal, son of Ahiram, king of Byblos, made for Ahiram, his father, when he placed him in the ‘house of eternity’. Now if a king among kings or a governor among governors or a commander of an army should come up against Byblos and uncovers this coffin, may the sceptre of his rule be torn away, may the throne of his kingdom be overturned, and may peace flee from Byblos! And as for him, if he destroys this inscription, then the…!”

Unfortunately and rather ironically, the inscription did not prevent robbers from looting the tomb in antiquity. It is interesting to note that King Ahiram is not attested by any other source other than his tomb, and so the nature of his rule can only be seen by the wealth and depictions on his sarcophagus. The sarcophagus was sculpted in limestone extracted from a village in the hinterland of Jbeil: Tartij. Studies showed that the sarcophagus was painted in red, black and brown, some painting is still visible on the lid.

On this tomb is an engraving showing the king on his throne before a feast-laden table. The tomb sits above four carved lions, meant to have a protective function. The lid’s sides are formed by the heads of two more lions. Another side of the tomb depicts a funerary procession of courtiers. King Ahiram is represented sitting on his throne, holding a drooping lotus flower, symbolizing death, and receiving offering from the member of his court, lead by his son. On the lid was sculpted Itoobaal holding a blossoming lotus, symbolizing life, facing his deceased father holding the drooping lotus. As for the women on the sides of the sarcophagus, they were sculpted with their dresses hanging down from the waist, while grief is visible in their gesture. The meaning of the scenes portrayed on the short sides of the sarcophagus is clear enough; on each are depicted four mourning women. The women stand bare-breasted, the upper part of their dresses apparently torn and hanging down from the waist, while their hair falls in disorder over their shoulders. Two of them slap their hips while the other two hold their heads in their hands as if they would pluck out their hair in bitterness of their anguish. There are several references to the custom of hand slapping in the Old Testament, which show that in the ancient east this was a sign of profound grief.

The mystery of mid Bronze Age Lebanon still remains despite various clues such as the tomb of Ahiram. The tomb itself sits in the National museum of Beirut in pride of place and remains a compelling and mysterious artifact for historians on this ancient powerful Mediterranean culture. The influence of the Phoenician city kingdoms has left an indelible mark of influence on near western civilization although its scope is unquantifiable and lies somewhat cryptically hidden in artifacts around the Mediterranean basin.

That Mysterious tomb lies dormant in the National Museum murmuring of a night that was, when last of his reign, they sealed him off. Ahiram’s name glitters today, an epitaph on a tombstone; his throne replaces his name into the sands of time. He lies in a tomblike building with the stars and moon above him. The mourning tears from ancient times now became dew. Forever, Moving across space and time, he worked so hard to be sealed in his tomb, yet his tomb lies silent while his body has vanished into the unknown. 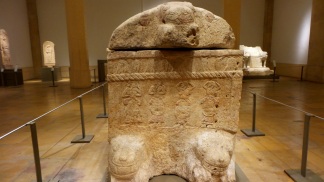 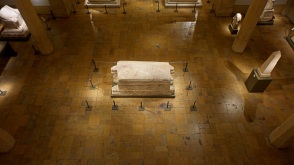 from phoenician era: the rotten plant in the kings hand and his feet put behind each other means that the king is shown as already deceased. 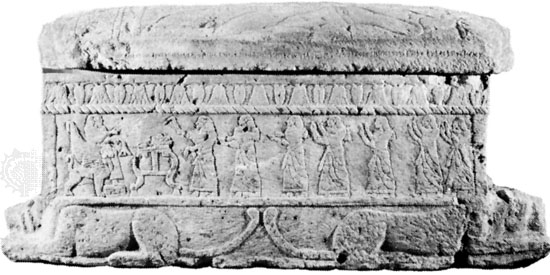 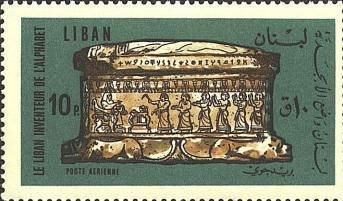 2 thoughts on “The Sarcophagus of King Ahiram”