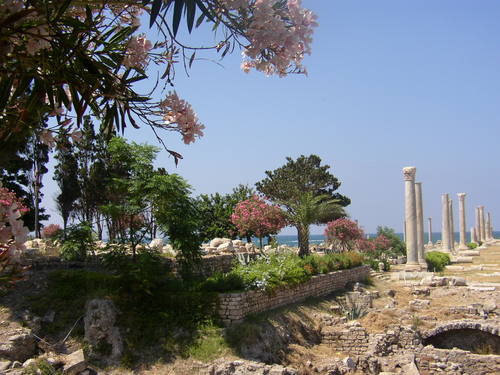 Tyre is a fabled place where monumental ruins recall as they change character with the daylight, the grandiose architecture and the vision, which its roman conquers, acquired from the orient. It evokes in equal measure the splendors of Phoenician times and those of Rome and Byzantium.

This magical city used to be an ancient Phoenician port city, which in myth is known as the birthplace of Europa (who gave Europe its name) and Dido of Carthage (who gave aid to and fell in love with Aeneas of Troy). The name means ‘rock’ and the city consisted of two parts, the main trade center on an island, and ‘old Tyre’, about a half mile opposite on the mainland. The old city, known as Ushu, was founded 2750 B.C. and the trade center grew up shortly after.

The prosperity of Tyre attracted the attention of King Nebuchadnezzar II of Babylon who laid siege to the city for 13 years in the 6th century B.C. without breaking their defenses. During this siege most of the inhabitants of the mainland city abandoned it for the relative safety of the island city. Ushu became a suburb of Tyre on the mainland and remained so until the coming of Alexander the Great. The Tyrians were known as workers in dye from the shells of the Murex shellfish. This purple dye was highly valued and held royal connotations in the ancient world. It also gave the Phoenicians their name from the Greeks, Phoinikes meaning “purple people”. The city state was the most powerful in all of Phoenicia.

In 332 B.C. Alexander the Great set out to conquer this strategic coastal base in the war between the Greeks and the Persians. Unable to storm the city, he blockaded Tyre for seven months. Again Tyre held on. But the conqueror used the debris of the abandoned mainland city to build a causeway and once within reach of the city walls, Alexander finally breached its fortifications. It is said that Alexander was so enraged at the Tyrians’ defense and the loss of his men that he destroyed half the city. The town’s 30,000 residents were massacred or sold into slavery. Tyre then fell under Roman rule in 64 B.C. Nonetheless, for some time Tyre continued to mint its own silver coins.

The Romans built great important monuments in the city, including an aqueduct, a triumphal arch and the largest hippodrome in antiquity (the best preserved in the world), once seating 20,000 spectators with a 480m long course. Primarily constructed for chariot races, the ends of this racing oval were marked by turning stones called metae which still sit in place. Today it’s used as a jogging course. In 1984 UNESCO designated the historic town a World Heritage Site, yet in 1982 and 1996 the ruins were damaged by Israeli offensive.

Tyre, as often before in its repeated aggression over centuries, which constantly threatens its long history, is a martyr resisting. Whether referring to the city of antiquity or to the modern town, the same Tyre will always evoke the 4000 years old supreme city, were sailors ruled the seas for 3 centuries. As one looks onto the sea through those statuesque columns, one can’t help but think the Romans were right. Be it death, be it life, one can bear anything. When the waves go rough, hold on to nothing. This city layered with guilt, destruction, power, and magnificence, wrestles with the past as it moves forward. If it teaches us anything, it’s that we can start anew, although there’s no such thing as an empty canvas.

This monumental city lives in ruins, was build on ruins, and people who once existed are now like relics. One should always embrace the past and never abandon any memory, be it beautiful, be it cruel. This sacred grounds of turmoil history, in fallen empire sleeps, beneath a forgiving sky, gazing always ahead to the sea, wondering what future beholds. And it lives on.