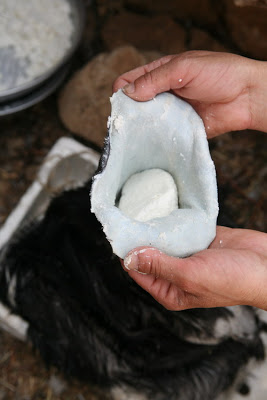 There is an intimate connection between food, seasons, and land that is universal. As the seasons change so does the earth, the air, the animals, and our body start to require different types of food. Somehow we are all connected on this little planet and what influences one, influences the other.

Goat farming is widespread in the marginal areas of Lebanon. The adopted breeding system is the extensive pastoral system, centuries old, relying on pastures as its main source of feed. The local goat population consists mainly of the indigenous breed of Baladi goat characterized by its rusticity and ability to value the limited resources of the tough land that no other ruminants can reach. The work of herders, who pasture their flocks in mountain meadows and make cheese in Alpine dairies, with great respect for the principles of environmental sustainability, is an important social, economic, rural and cultural resource for their local areas.

High up in the mountains of North Lebanon, in the inland areas, as autumn draws near, the air becomes cooler and calmness sets in when the summer heat is over. The season is heralded with a deliciously pungent goat’s cheese, the Darfiyeh, Less well known of the cheeses, for this reason, it is protected in the Slow Food Ark of Taste (refer back to the post: The Superfood). This goat cheese is pastured among the last centuries-old giant cedars, and their milk is used to make darfiyeh cheese, which is also notable for being matured in an unusual container: a cleaned-out and salted goatskin, which is matured for some months inside humid caves. The sale of the matured cheese is then often carried out directly in the village butcher shop, together with goat’s meat.

Made with unpasteurized milk, Darfiyeh cheese relies on an ancient method of maturation inside a darf (goat’s skin). Had it not been for this fact, it’s almost too simple to prepare. Goat herders, who make it, first add a starter culture either of goat’s rennet or dried goats’ colostrum, which gives the cheese its distinct flavor.

They then leave the raw milk in 30 to 35°C ambient temperature until liquids and solids separate. They strain the mixture and mold the solids in chunks, which they salt and allow to drain further. Heating the remaining liquid or lacto serum until a further separation occurs they produce a granulated cheese similar to ricotta, called arishe.

The procedure takes an interesting turn when they clean a goat’s skin, and rub its inner side with salt. The pores act as a sieve slowly releasing water and allowing fermentation. They skillfully tie the skin to form a pouch leaving one small opening to allow them to fill it with layers of cheese and arishe. Securely tied, the darf is left for 3 to 6 months on wooden slats in a dark and damp store. At the outset, this white cheese is soft and has a distinct goaty taste; as it matures, it becomes harder and the taste more peppery and complex. The cheese keeps in glass jars in the fridge for several months.

A regional delicacy unknown to city dwellers, Darfieh is linked in the minds of people born in the North of Lebanon to end of summer memories and frugal evening meals. The silhouettes of the herders’ wives carrying their goatskin bundle cut through the fog in the afternoon as they wandered down to the village to sell their cheese. A vision of beauty that is picturesque to our land, of this season, made with care from farmers who connect with this earth and make the best out of it.