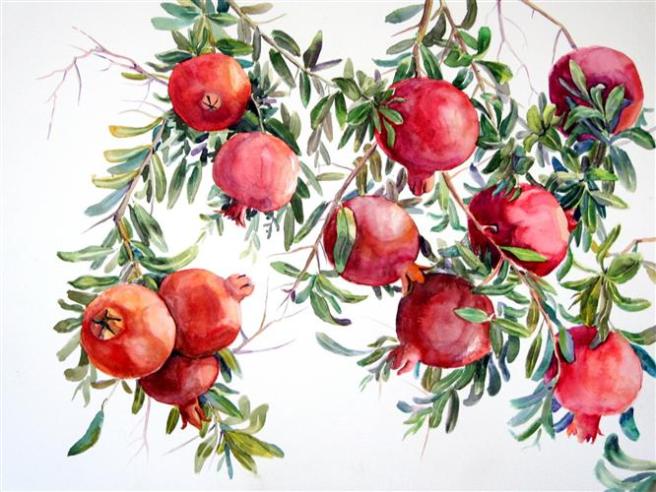 The pomegranate originated in the region of modern-day Iran and has been cultivated since ancient times throughout the Mediterranean region and northern India. In Lebanon it is typically in season from September to February. Its name derives from Medieval Latin pōmum “apple” and grānātum “seeded”. While the apple usually takes the blame for humanity’s fall from grace, some biblical scholars have suggested that the forbidden fruit of the Bible wasn’t an apple, but this red beauty.

The pomegranate is actually a bush-like plant, which is pruned so as to prevent it from growing tall. It requires as high a temperature as possible to become sweet and is therefore best grown in the Mediterranean and the Middle East. It is grown from the south all the way to the north of Lebanon.

After scoring it with a knife and breaking the pomegranate open, the seeds are separated from the peel and internal white pulp membranes. The entire seed is consumed raw. Its sweetness overwhelms like the pleasant pop of a concentrated juice encased in a soft shell.  Sweet sharp burst  overtake by a flood of tangy red, overcomes the mouth and drips from the corner of the lips. It tastes like the essence of a fruit, very powerful in flavor leaving your lips died in its rich deep red color.

Pomegranates are not only consumed as a fruit in our region where they are widely grown. Its juice is a source of energy, especially in winter, and its sherbets and molasses are regional delicacies. Sharab el Romein, Pomegranate sherbet, has been a source of refreshment ever since Ottoman days, while its molasses, made from sour pomegranate, is a very strong candidate for the place of lemon juice and vinegar as an ingredient for salad dressings.

Few fruits besides the pomegranate have made such a lasting impression as a symbol of hope and eternal life. Being evergreen throughout the year, the human mind attributes it to the immortality of the soul. In time, the many seeds in a single fruit have come to stand for prosperity. When one buys a new home, it is conventional for a houseguest to bring as a first gift a pomegranate, which is placed under or near the home altar of the house, as a symbol of abundance, fertility, and good luck. Multiple fruits contained within a single hull make it a symbol of fertility. A ripe pomegranate is broken on the doorsteps of newlyweds to ensure future prosperity.

Almost all the great religions of the world have sanctified the pomegranate and ascribed manifold meanings to it. In Greek mythology, Hades, the god of the underworld is said to have seduced the goddess of fertility, Persephone, with pomegranate seeds. The fruit was used as a holy symbol and respected in Zoroastrian worshipping ceremonies and rituals. It symbolized the soul’s immortality and the perfection of nature for Zoroastrians. The pomegranate was also used as the symbol of eternal life and the Doom’s Day in Virgin Mary and Jesus’ statues throughout the Christian world. Islamic thought placed pomegranate trees in the gardens of Eden; it’s one of the four holy trees. It is also a symbol of beauty,  giving beauty to those who eat it. Prophet Mohammed advised pregnant women to eat pomegranates if they wanted beautiful children.

Where I’m from we swallow the seeds  so that a pomegranate has the chance to become  a tree in our souls. We swallow the seeds because it reminds us of our land, of its richness and its fruitiness. Where I am from, pomegranates are ruby jewels that adorn our land with its exquisiteness and enriches us with its taste. Because nothing tastes more like home to me then a sweet succulent pomegranate seed.

2 thoughts on “The Ruby Jewel of Lebanon”