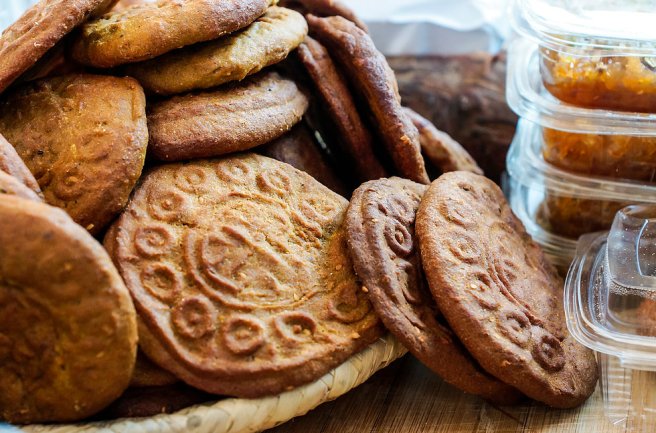 There is something quiet exceptional about ka’ak bi halib, or milk cookies. The mahleb and the anise echo the flavors and fragrances of home. Soft, chewy, buttery, sweet, fragrant, and comforting, they melt in your mouth, leaving behind the after taste of aromatic spices.

Different regions in Lebanon claim their right to fame producing the best kaak bi halib. Each region depending on its culinary influences, prepares them differently. The two most famous regions in producing what we would like to call as the best ka’ak bi halib are Zahle and Marjeyoun.

They are traditionally made from milk, flour, and spices. Most notable of the spices is mahlab, which is an aromatic spice derived from the ground pits of cherry seeds. These sweet bun cookies come out of the oven soft and billowy. They serve as the perfect addition to a cup of coffee or tea. Kaak bi Halib are customarily eaten during easter time.

Mahleb, used in middle eastern cooking, imparts a really subtle flavor and the scent is lovely. The taste is between bitter almond and cherry.

Zahle is also famous for kaak-bi-haleeb – kaak with milk – a swirl of a bun made with leavened sweet dough, traditionally made into rings. Flavoured with mahlep this type of kaak is deliciously plain with a texture so soft that it melts in your mouth, once you’ve had one bite you become hooked. The Zahle style Kaak bi 7alib at Salon des Familles are personally my favorite. I was introduced to them when our neighbor, the very elegant Richard, brought them back from his hometown.

At Easter the same dough is used to make a larger round bun, called Kaak el Eid or A’ras. These are sometimes flavored with aniseed or orange blossom and embossed in the center with a cross shape. They are usually distributed at the end of a church service, or simply baked at home and shared with visitors.

While Zahle’s ka’ak be halib is shaped forming rings with a whole in the middle, the Marjeyoun ka’ak bi halib is flat and a bit drier by nature. To the Mahlab, anissed seeds, and a little ornage blossom are added giving it a richer flavor then its Zahle counterpart.

Another southern specialty ka’ak are the Chewy yet fragrant, kaak al-Abbas. “They are Ashoura’s celebrated culinary tradition. Distributed at the end of “Majlis al-Aaza” – gatherings where the story of Imam Hussein is recounted in the nine days preceding the day of Ashoura – the anise-and-turmeric-scented cookies are a delight to the tastebuds after crying one’s heart out listening to the tragedy that befell Hussein and his family.

Kaak al-Abbas was named in remembrance of Al-Abbas, Imam Hussein’s half brother, who was murdered while collecting water from the Euphrates River to quench the thirst of his niece, Sukaina bint al-Hussein, after the Hussein’s camp in Karbala was held under siege and ran out of water and food supplies.

Round-shaped with four smaller circles carved on its surface, kaak al-Abbas are not Ashoura-specific staples and can be enjoyed all year long. Made from anise, ginger, nutmeg, sesame, turmeric, milk, and good quality olive oil, they are a pure delight and very rich in flavor. The scent of all the spices mixed together make it a thing of pure delight that I am very proud of sharing with friends whenever my mother-in-law sends me some.

For traditional, almost homemade kaak al-Abbas, head to Abu Ali’s bakery right at the entrance of the southern village of Marwanieh, just a few kilometers from Nabatieh. There, owner Abu Ali and his apprentices have been baking kaak al-Abbas the traditional way for decades. Chewy, crumbly and perfumed with the perfect cocktail of spices, Abu Ali has a strong claim that he bakes the tastiest kaak al-Abbas in the country.

“The secret is how much time you leave the dough to rest before you start the baking process,” the baker confides. “The amount of love and passion you put in making every batch is equally important.”

If you do visit Abu Ali’s bakery, you should also try their legendary “mashateeh,” a typically southern Lebanese wholewheat oval-shaped bread.

So that is how our cookie crumbles. Decorated by hand or with cookie cutters, our cookies carry stories of lost families, of women getting together in the kitchen preparing for religious holidays, of sharing love, recipes, and a pride in creating out of the simplest ingredients, the humblest and most wonderful of things, cookies! Realizing that not only a family, but an entire nation, can be united and fortified through the celebration of food, tradition and pride.

I’ve included what my mom says is the best Marjeyoun ka’ak bi halib recipe that was handed down to her from a family member Aida Barakat, in case you can get around to understand it. I will repost a cleaner version of it later on. 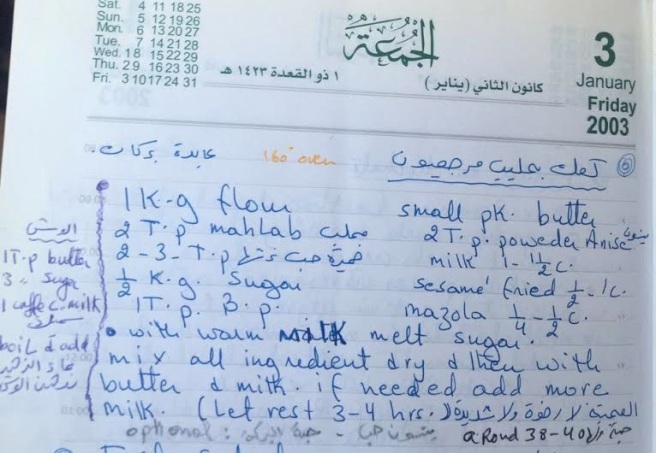 6 thoughts on “The Taste of Heaven”