“…the miserable village which still bears the name of Afqa at the head of the wild, romantic, wooded gorge of the Adonis. The hamlet stands among groves of noble walnut-trees on the brink of the lyn. A little way off the river rushes from a cavern at the foot of a mighty amphitheatre of towering cliffs to plunge in a series of cascades into the awful depths of the glen. The deeper it descends, the ranker and denser grows the vegetation, which, sprouting from the crannies and fissures of the rocks, spreads a green veil over the roaring or murmuring stream in the tremendous chasm below. There is something delicious, almost intoxicating, in the freshness of these tumbling waters, in the sweetness and purity of the mountain air, in the vivid green of the vegetation.”

Sir James Frazer describing the village at Afqa in his 1922 book, The Golden Bough

Hidden between cavernous mountains, flowing with water, lies the grotto of Afqa. Flowing with life, it gushes with stories that date back to a time where legends where told and worship of a female saint is a remarkable direct reflection of paganism.

Distinguished for its colossal grotto, Afqa is a rectangular-prism-shaped breach within a 200-meter-high Cliffside, forming an immense natural amphitheater. From a distance, the cave appears like a mouth opening in the face of a giant moss-covered boulder. The cave’s mouth bursts forth with a gushing waterfall that feeds into Nahr Ibrahim (Adonis River) and coalesces into Lake Yammoune. The river emerges from a large limestone cave in the cliff wall which stores and channels water from the melted snow of the mountains before releasing it into springs and streams below. At Afqa, several watery threads flow from the cave to form numerous cataracts, a scene of great beauty.

Known in ancient times as Apheca or Afeka, interpreted as “source”, Afqa is located in the mountains of Lebanon, about 20 kilometres from the ancient city of Byblos. It is the site of one of the finest waterfalls in the mountains of the Middle East. Aphaca, the only inland Phoenician town of any importance, was a sort of Delphi, a collection of temples rather than a town.  It was dedicated especially to the worship of the Syrian goddess, Ashtoreth or Venus, sometimes called Beltis or Baaltis, whose orgies were of so disgracefully licentious a character that they were at last absolutely forbidden by Constantine. There was a time when the whole valley formed a sort of “Holy Land,” and at intervals on its course were shown “Tombs of Adonis,” analogous to the artificial “Holy Sepulchres” of many European towns in the middle ages.

At Aphek, Ba’alat was worshipped in the form of a meteorite that had fallen from the sky in a blaze of fire; the Greeks equated Her therefore with their Aphrodite Urania, “Heavenly” Aphrodite. As Ashtart is a Goddess of the planet Venus, which looks like a star from Earth, it is not surprising that a meteorite, or a “falling star” should be associated with Her. The meteorite was said to have fallen into the sacred lake at Aphek, and was later set up in Her temple there. This temple is also said to have been dedicated to the Goddess who is the mother of Adon, Myrrha (Her Greek name from which the name the  a myrrh tree).

Byblos was aided in its role as a religious center by a local legend whose fame became widely spread. It was the story of Adonis. Born a beautiful baby boy named Tammuz, he was left without parents to care for him. (to read the fill story: https://365daysoflebanon.com/2016/02/13/a-love-story-on-nahr-ibrahim/) in observance of his story, the river which coursed down from these hills to a place near Byblos was called the Adonis River. In his honor “Adonis gardens” were grown each year by sprouting seeds in a dish which sprang up bright and green but then perished. The Greek people later became so caught up in these emotional observances that the legend of Adonis was brought completely into their mythology, and through them the imagery of Adonis came to the west. In Lebanon the month of July is still called Tammuz in his honor, where the joy of life is reborn in the mountains and flows down to the people, and Adonis lives.

A great and ancient temple located there, where ritual prostitution was practiced until the time of Constantine banished it. Sir James Frazer attributes its construction to the legendary forebear of King Cinyras, who was said to have founded a sanctuary for Aphrodite (i.e. Astarte). Reconstructed on grander scale in Hellenistic times, then destroyed by the Emperor Constantine the Great in the fourth century, it was partially rebuilt by the later fourth-century emperor, Julian the Apostate. The site was finally abandoned during the reign of Theodosius I. Massive hewn blocks and a fine column of Styenite granite still mark the site, on a terrace facing the source of the river. The remains of a Roman aqueduct that carried the waters of the River Adonis to the ancient inhabitants of Jebail are also located here.

Each spring at Afqa, the melting snows flood the river, bringing a reddish mud into the stream from the steep mountain slopes. The red stain can be seen feeding into the river and far out to the Mediterranean Sea. Legend held this to be the blood of Adonis, renewed each year, at the time of his death. Lucian of Samosata, a Syrian by birth, describes practices by the Byblians of worship which some told him centered not on Adonis, but Osiris. He writes that he mastered the secret rites of Adonis at the temple at Afqa and that the locals there asserted that the legend about Adonis was true and occurred in their country. Lucian describes the rites, annually performed, that involved the beating of breasts and wailing, and the performing of their secret ritual amid signs of mourning through the whole countryside. When they have finished their mourning and wailing, they sacrifice in the first place to Adonis, as to one who has departed this life: after this they allege that he is alive again, and exhibit his effigy to the sky.”

In his “Terminal Essay” in the 1885 translation of The Arabian Nights, Sir Richard Burton describes the temple at Afqa as a place of pilgrimage for the Shi’ia Muslim and Christians alike, attributing to it healing and fertile powers, where vows are addressed to the Sayyidat al-Kabirah or “the Great Lady”. In the early 20th century, strips of white cloth were still being attached to the ancient fig that shadows the source, where Shias and Christians alike were bringing the sick to be cured at “the abode of Sa’īdat Afkā, i.e. a feminine spirit of the same name as the place where Her husband built this temple. He was killed by a wild beast, and she searched among the mountains until she found his mangled body. This is evidently a modified view of the ancient myth of Astarte and Adonis,” Lewis Bayles Paton reported in 1919, with a photograph of the cloth-hung fig tree. 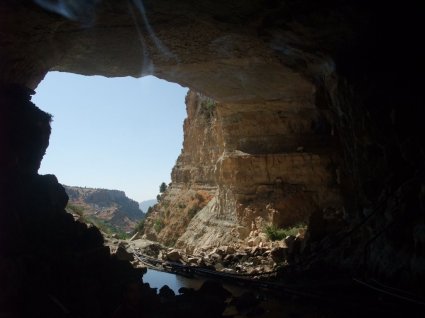 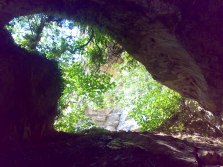 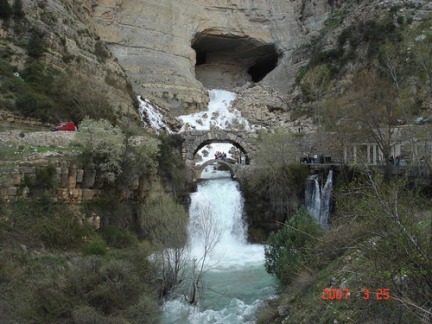 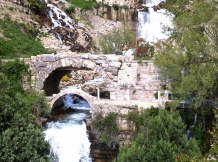 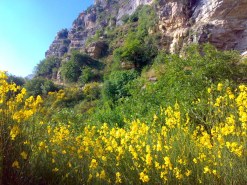 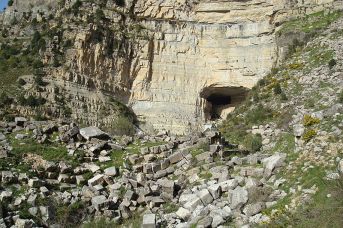