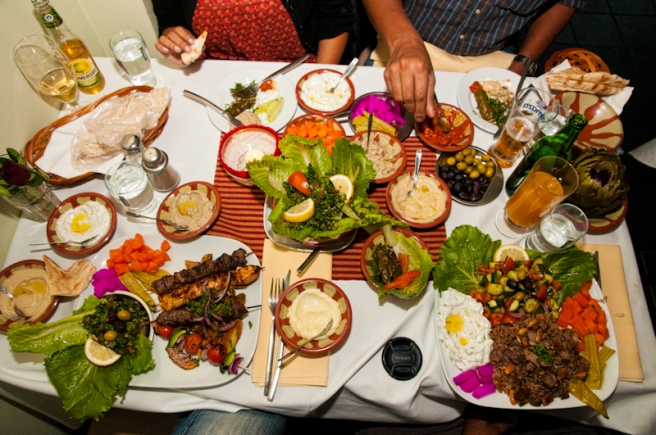 Being a good host is something of a lost art. Hospitality refers to the relationship between a guest and a host, wherein the host receives the guest with goodwill, including the reception and entertainment of guests, visitors, or strangers.

There is an undercurrent of what we call “Lebanese hospitality,” a tradition of which we are very proud. This is a culture where it is considered an honor to have a guest in your home. With that comes great responsibility and great care on how to be the best hosts to your guests. If someone invites you into their home, whether you are a friend or stranger, it’s rude to say “No.” Instead, you always say, “mart el jey, Inshalla,” (meaning next time, God willing).

In Lebanon, we invite people over for lunches and dinners. Small dinner parties and large one are held at all times during the year. The most frequent question asked a couple of hours before the guests arrive when panic starts to set foot in the kitchen is “bi a2deh il akil?” meaning “do we have enough food.” My American friend Jennifer once told me that the first time she started feeling that she was being “lebanified” is when she was hosting a dinner party at home and felt a strange fear that she had never experienced before as she wondered whether there was enough food, which obviously there were.

Most dinner parties will most certainly have one dish with chicken, another with beef, and one with fish, as proper etiquette will dictate it. There will be an array of other dishes like the infamous sushi cake prepared to serve a mass number of people a lot of sushi. Some other dinners will be having Lebanese food with stuffed grape leaves and sayadiye (fish with rice) with plenty of mezza on the side. The one thing that all those dinners have in common is the huge amount of food that will be on display and to savor at the dinner table. The general rule of thumb if you are inviting a certain number of people you multiply the food by two. If by any chance one plate is completely emptied, maybe because it was the star of the night, another panic will take over, of whether a bigger portion should have been prepared, completely disregarding the fact that that’s a good sign that the dish was good.

We live in fear that food will run out and we would have to face the dreaded reality that we were stingy while preparing the food. At the end of the day as we say in Lebanon “seit ghina wala seit fo2or” (better a reputation of being rich then being poor). In our culture, when people share food with you, especially at their homes, it is believed that it deepens the bond between people as the saying goes “ sar fi bayna khibiz wo meleh” (there is bread and salt between us).

At the end of the day, Lebanese dinners are livelier then the rest as we share food, pass it around, discuss different dishes, and keep on being stuffed by our hosts who keeps on filling our plate with food and asking us to add more.

The Lebanese word for being hospitable is midyaf coming from the word dayf, which means guest. The words we grow up hearing our parents say “tfadaloh sharfouna” (come in, your presence is our honor) are instilled in us from an early age and highlight the importance of being “midyaf” and the beauty of Lebanese hospitality.

Louis, chevalier de Jaucourt describes hospitality in the Encyclopédie as the virtue of a great soul that cares for the whole universe through the ties of humanity. In our country, this closeness seems natural. We feed those we love, even those we don’t. We have them over at our home and “mna3mil min 2imton” (meaning we do what’s right by their stature) because we are who we are. We are Lebanese!

So next time when you are having a dinner party at home, set your mind at ease and be sure that “il akil akid be adde” (there is plenty of food for sure!) 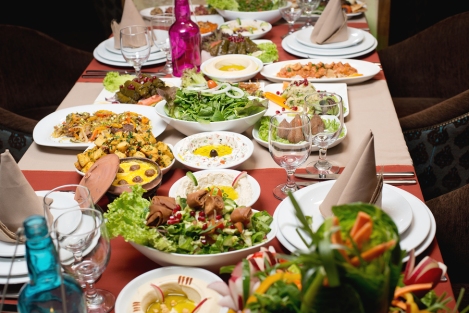 Table with various food served in a restaurant 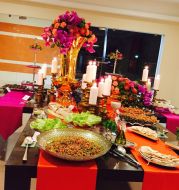 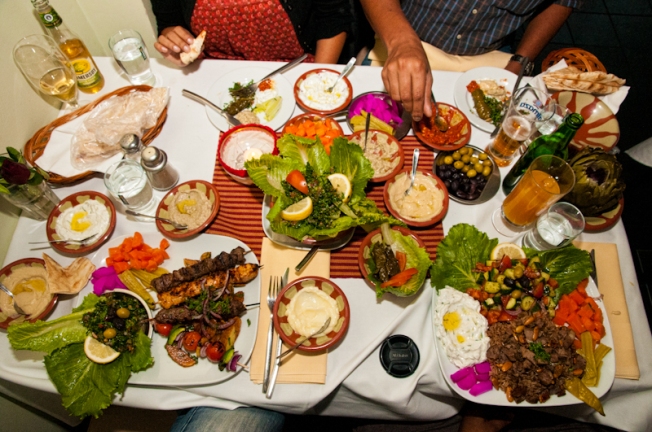 2 thoughts on “The Dreaded Question…”