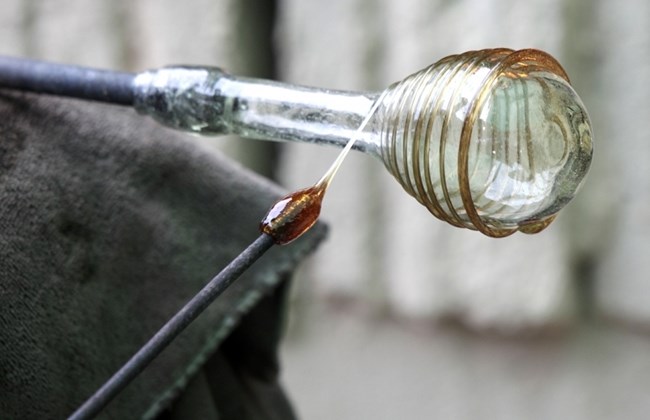 The modern art of glass blowing may use modernized equipment, but the essence of working with glass remains an ancient art. Molding red-hot liquid glass to create a lasting glass artifact is an act that requires a creative mind, dexterous handwork, and stamina, a very physically draining work.

Throughout history, the basic knowledge and techniques of glass blowing have been highly coveted, and at times, held sacred by only a select few. This information was handed down secretively from glass blower to apprentice for thousands of years.

Throughout history, glass blowers were literally held hostage for fear of their knowledge being leaked. During the 1st Century A.D., Phoenician glassworkers were forbidden from traveling, although those who escaped spread the art form into present day Switzerland, France, and Belgium.

Glass was invented in either Sumeria or Egypt, but its full development was accomplished in Egypt around 4000 BC. But it was the Phoenicians, around 50 BC, who revolutionized glasswork when they introduced the blowpipe technique. This allowed the creation of an unlimited number of shapes and objects speeding up the production and lowering costs.

Before the discovery of the glass-blowing technique, glass was used to make bracelets, necklaces, jewelry and non-transparent beads. With this invention, the Phoenicians began to produce bottles, glasses, vessels, vases, goblets and other containers for domestic use. Phoenicians worked the glass paste and succeeded in transforming the traditional opaque material into a transparent glass. This revolutionary technique confirmed the Phoenician glass craft in its nobility and its trade flourished as appreciation for the transparent glass works became widespread in the world, as it was known then. Blown glass workshops appeared in all Phoenician cities, and more particularly in Tyre, Sidon, and Tripoli. The finest mould-blown glass vessels of antiquity were signed by their maker, Ennion of Sidon in the Tibero-Claudian era (Ennion was among one of the most prominent glassworkers of Ancient Rome. He is the first known maker of decorated mold-blown glass, and probably lived and worked in the city of Sidon, Lebanon. He was renowned for producing the multi-paneled mold-blown glass vessels that were complex in their shapes, arrangement and decorative motifs. In the 3rd and 4th centuries AD, glass vessels were the most common grave goods and reveal the large scale on which this industry must have been producing.

Soon enough, blown glass replaced traditional pottery in the manufacture of tableware like serving dishes, drinking glasses, carafes, and eating plates. Phoenicians, who are famed for being great mariners and merchants, spread this technique throughout the Mediterranean. Glass-making workshops in Sidon established themselves among the most renowned in the region. The new practice then spread through the Roman Empire, laying the foundations for what was to become one of the most illustrious centers for glass blowing in Europe in Murano, Italy.

Near Tripoli, in Beddaoui, blown glass is manufactured in a gloomy archaic workshop where color is only brought on by the craftsman’s production of glass blown pieces aligned on improvised shelves. Glasses, vases, candleholders, and bowls dispense a wide array of colors ranging from violet to turquoise, green and yellow. The unique characteristic of the Beddaoui workshop is that it produces a particular glass material that is slightly opaque and sprinkled with tiny air bubbles, reviving an ancient and forgotten technique. On the contrary, the Sarafand workshop manufactures a clear transparent glass that is free from air bubbles.

In the southern coastal village of Sarafand, time seems to stand still, This bustling port town, where fruit is still stacked in wooden crates and chickens roam the winding streets, as its main street opens up to the hustle and bustle of car mechanics, is home to the last dynasty of glass blowers in Lebanon.

The Khalifeh family have passed down for hundreds of years, from one generation to the next, the art of glass blowing. As a child Hussein Khalife learned the ancient art of glassblowing from his father, who always reminded him of his duty to keep the legacy of glassblowing alive. For them, glass blowing is in their blood and something that involves all the family members.

Tucked away in a courtyard, under the shade of pomegranate and orange trees, their old forge still produces glass in a furnace that dates back 2,000 years to Phoenician times. From this furnace, 18-year-old apprentice Ali Khalifeh pulls out a glowing ball of molten glass using a long, hollow, metal rod. He lifts the tube to his lips and begins to blow air into the molten mass, just pulled from the oven, creating a glowing bubble. After a few seconds, he slowly rotates the pole to create a bulbous shape. A second blowing shapes the red-hot material. He then inserts it into an old cast iron mold and finally the object is detached from the metal bar.

At this point, master craftsman Hussein grabs the newly formed glass with a large pair of pliers, shaping it with a loud iron machine that cuts away the excess parts. After that it is baked for a second time at a lower temperature to solidify the new glass.

This is a painstaking and delicate process requiring great skill to manage the heat and calibrate temperatures with the ambient air. At the initial stage, the piece can be forged and moulded because it is hot, but there is the risk that it will crystallize with an imperfection. For this reason, learning to blow the glass requires a lot of experience and years of practice.

The glass artisan is a historical profession midway between craftsman and artist. The artisan should possess strong creative skills and dexterity combined with solid artistic training. It is a very challenging activity that needs passion and precision.

Sparkling in sunlight, catching the flame, these simple looking artworks begin life as water seeping into sand. Over time fire within water brings life within sand. As this water goes solid, as solid as glass, those beautiful artifacts become as fragile as the hands that bring them into life. 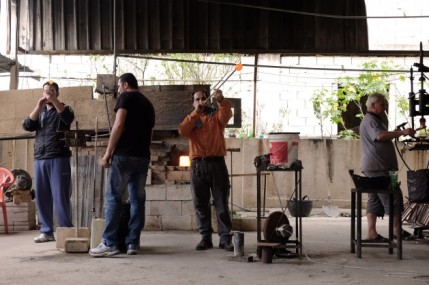 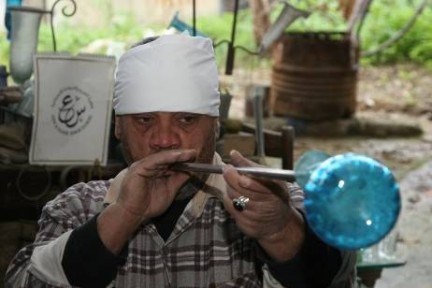 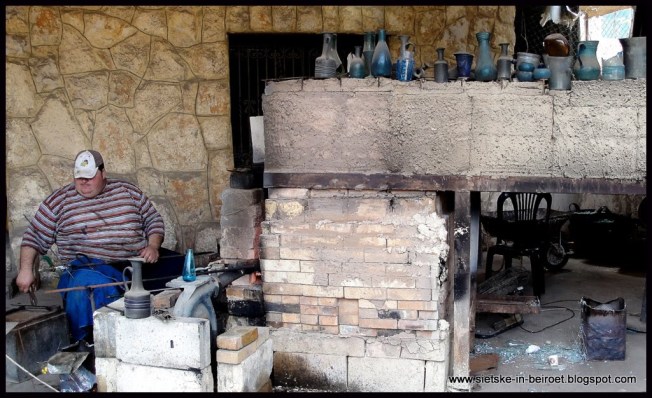 2 thoughts on “The Ancient Art of Glassblowing”