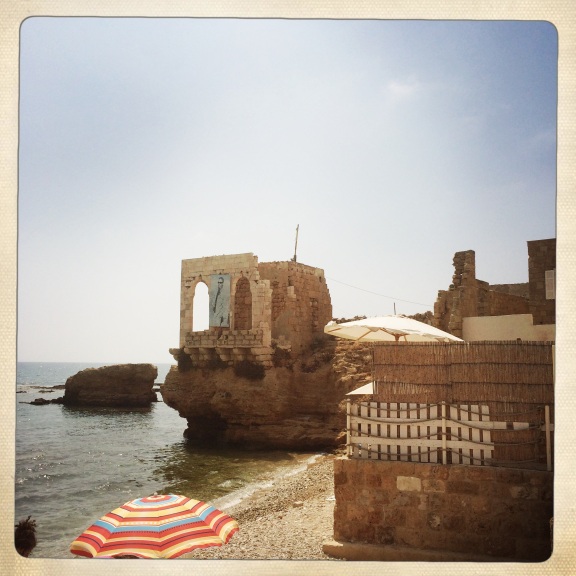 The charming coastal town of Batroun, nestled by the sea, gathers close the winding roads, the homing trails, and lanes that sleep the whole night long. Cooled by the scent of mountain breeze, it is lulled by the sea wind’s song.

This little town, seen through a summer haze beneath the golden days, not crowded in deep valley, but open to the sun, the rain, the starlight, and the breeze, is in a constant dreamy state of mind. Among the whitecaps and the taste of the cool marine air, I like to take lazy walks throughout town, with a soft breeze brushing my hair.

Their vaults made up of Batroun’s sandstones distinguish the traditional Ottoman houses and cobblestoned streets of the old town. They are the achievements of a rich social class, bourgeois tradesmen and industrialists. The marketplace used to host a great number of shops, stores caravanserai, hotels and firms, above which were the dwelling-places of people.

Little is known about the history of Batroun founded by the Phoenician king of Tyre Ithobaal I. There was hardly any excavation performed and early written documents are absent. Once a flourishing city and port in Phoenician times (3000 − 64 BC), Batroun is likely the ‘Batruna’ mentioned in the 14th century BC Tal el-Amarna tablets of Egypt. The Greeks gave it the name Botrys, ‘bunch of grapes’, referring to the vineyards that covered the area and still do. Both the name and the vineyards were maintained during Roman (47 BC – 395) and Byzantine times (until 636). The town suffered greatly from Lebanon’s coastal earthquake and tidal wave in 551. The Arabs gave it the name Batroun, while during Crusader times (1104 – 1289) it was known as Butron as part of the Country of Tripoli.

The best-known period in Batroun’s history was under Ottoman rule from 1861 – 1918, during which it flourished in religion, culture, architecture and economics, as still shown by the beautiful Ottoman houses, and Saint George and St Stephen Cathedral overlooking the fisherman’s port. Its winding alleys make up its inner neighborhoods of dense housing, incorporated into the walls of its Crusader castle. During this time, Batroun also prospered from its surrounding trees (mulberry, olive, lemon, almond and fig), vineyards, wheat and tobacco.

From its beautiful seaside, to its momentous Catholic and Greek Orthodox churches, to its old marketplace, and its central old town, Batroun is a breezy relaxed little town with inhabitants that have learned that life’s simple pleasures are what makes this life worthwhile.

One thought on “Beautiful Batroun”