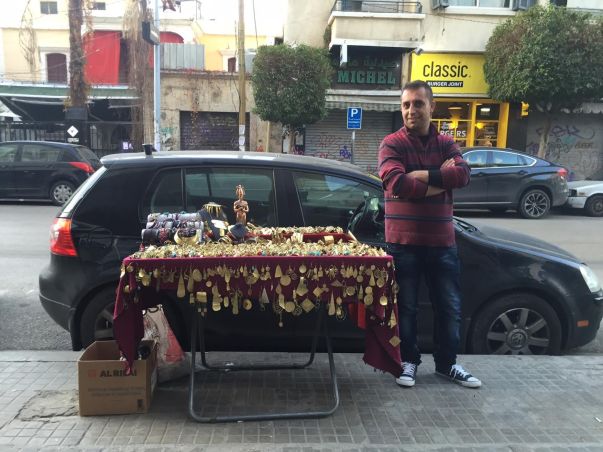 Sometimes it is with great dignity and love that one faces life’s hardship. Some people’s willpower can be surprising at times with an optimism that overshadows one’s manmade cruel fate. Below is the story of such a human being.

Ahmad Mohamad, a Syrian refugee is turning 40 on the second of this month. Like millions of his countrymen, he had to escape from the ruthless reality of his town, seeking refuge in Tripoli. Displaced, homeless, with his family of seven children (five boys and two girls), he has managed to secure a small apartment and put three of his children into a school. The rest unfortunately, just like the plight of most Syrian children, are in limbo waiting to go back to what was once a loving home.

Ahmad used to be a silversmith back in Halab, creating necklaces, earrings, and rings.  He now stands on the street of Mar Mikhael (facing Oslo and Classic burger just next to the Mar Mikhael stairs) next to a small foldable table covered with a red cloth displaying his brass accessories, ranging in price from 10000 to 30,000 L.L. While his family is based in Tripoli, he comes to Beirut 3 days a week, from Friday to Sunday to sell whatever he has created to tourists mostly and the rest to the neighborhood’s young crowd.

He greeted me with a warm smile and stood next to me while I was trying a couple of things. I loved his work. It was raw, a little infantile, pure brass with not much fuss. Then I learned that his other children help him in creating his work. His wife tries to teach their kids at home while he goes to work. I could tell by his hands that he spends most of his days working with brass. There is something poetic with hands that work a craft. Somehow time and labor leave an imprint on them that only people who work with their hands share together, a certain kind of universal imprint.

He works from morning till 2 am. At night a little lamp illuminates his table. As the streets of Mar Mikhael settle down following a long night of music muffled with drinks and the hype of the young, he packs his little things. Regardless of the weather and the time of the day, he stands there, selling his artwork, trying to support his family the best way he can. Everyone in the neighborhood knows him and they greet each other like neighbors do, with a smile and a genuine care for one another. ‘kattir Kheir Allah, toul ma nihna ma3 ba3id. Shi nhar rah nirja3 a3 bladna” (May God’s goodness be plenty, as long as we are together. One day we will return to our country) is his response to his fortune.

There is glory in Ahmad’s story and his positivity, like the predicament of so many Syrians in Lebanon. Hold on tight to your family, to the ones who keep you safe, to the ones who teach you to grow. Cherish each moment and feel blessed everyday. There may be journeys we undertake, where long departures  and separations may change the course of our lives.   There will be pain and agony  and each may be taken  from the other. Yet the bonds will live on. This family bond will radiate  no matter what the world shall deal and thrust  into one’s heart and hands.  They, as a family, hold on to that love,  that love of father and son,  man and woman,   mother and daughter, and brother and sister,  for that is all. That love is all that lasts and endures in that collective tale of a broken country. 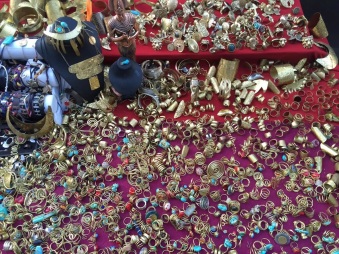