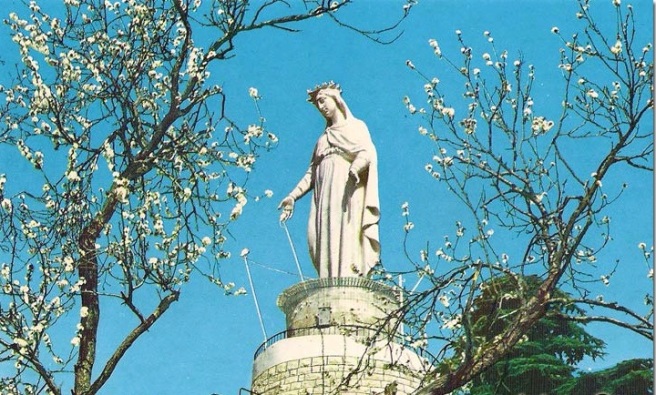 As one, we are senseless beings  begging for love, good health, and happiness, asking for forgiveness.  Hoping to see light, we look above and stare at her peaceful face, and rest  our heavy little hearts right on her shoulder. Occasionally I become lost in looking, and stagger into a daze as I wonder how many people have come here in search for something, asking her for help. She has stood there it seems for eternity contemplating anguish and propagating patience. Overlooking the bay of Jounieh, she opens her arms welcoming all.

On the 8th of December 1854, the Pope Pius IX had established the dogma of the Immaculate Conception and had announced it through his apostolic authority. The Catholic World in particular was shaken by this event, which filled the believers hearts’ with happiness.

In 1904, the ecumenical Church celebrated the fiftieth anniversary for establishing this dogma. Patriarch Hoyek and the Apostolic Delegate the Archbishop Carlos Duval thought of installing a religious monument that would perpetuate the memory of Confirmation of the Immaculate Conception. After consulting several bishops and priests, the two prelates decided to name this monument “The Lady of Lebanon”.

The statue was made in France from molded bronze. It has a height of eight and a half meters and weighs ten tons. It is unique in its beauty. The Virgin Mary stretches her hands towards the capital, Beirut, as if saying: “Come to me, oh believers, and satiate yourselves from my blessings”.

The pedestal of the statue is built from natural stone. It has a height of 20 meters. To reach its top at the statue’s feet, one has to climb a spiral staircase of one hundred and four steps. Thousands of all faiths climb these steps every year.

The small sanctuary and the pedestal of the statue were achieved by the end of 1907, marking this shrine as a sacred pilgrimage place and becoming recognized worldwide. Since the sanctuary of the Virgin was built in Harissa and her statue was erected on top of it, successions of delegations started marching towards the sacred mountain and believers thronged from Lebanon, Jordan, Palestine, Egypt, and other countries. They came to join their voices to the echoes of generations that beatify the Virgin. Some of them even shed tears of penitence at her feet.

Her statue is one of the few religious monuments that is visited by Lebanese of all faiths. Mary in Islam is always referred to with, “‘Alayhā l-salām” (peace be upon her), a title that is not given to any saint. Christians also give this title to Mary. There is an entire body of literature on Mary in the Koran. The Muslims make their way to these shrines, knowing that Mary is the woman most praised in the Koran, the only woman mentioned by name, called “Siddīqah” (true, believer, holy), a title reserved for men (siddīq). What a beautiful way to gather all Lebanese of all faihs, regardless of age, health, beliefs, economic and social standing, under the loving arms of a woman, who symbolizes every thing that is pure in this world.

Our lady of Lebanon stands there silently witnessing the good times and the atrocious ones. Her eyes like  eternal waterfalls wash our sorrow  blessing us all from Heaven’s skies. She opens her arms, welcoming, sheltering us in her embrace. Gazing down on us with her serene face tilted as if asking for our forgiveness, listening pensively. In her presence  Heaven and earth collide.   In her presence  all worldly distractions  are pushed aside and we are but children of God, helpless, hopeless searching for love.

One thought on “Our Lady of Lebanon”