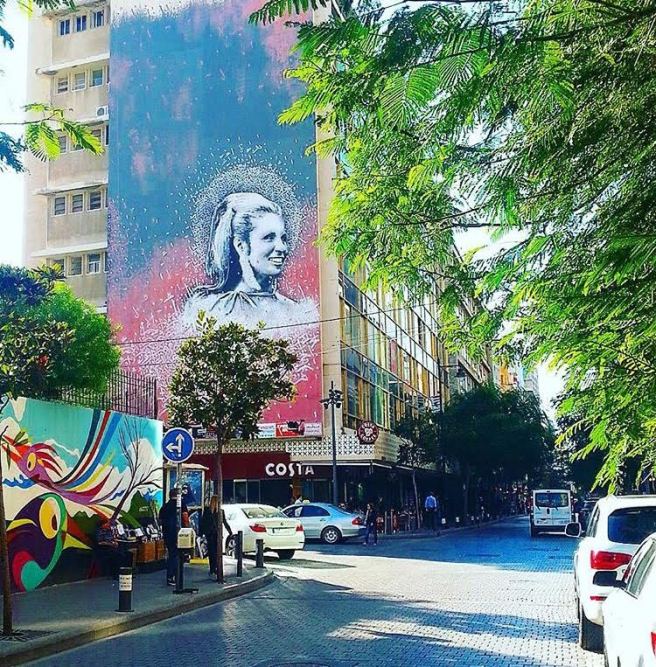 Hamra Street runs parallel to the Mediterranean coast. It is one of the main streets of Beirut. Due to the numerous sidewalk cafes and theaters that used to be around it, Hamra used to be the center of intellectual activity in Beirut during the 1960s and 1970s. It remains one of the last authentic bastions of liberalism and tolerance in the Middle East and the only cosmopolitan street in all of Lebanon. It’s the one place where sectarian, religious, and political differences don’t matter much for the people who live there. Streets have a life of their own, a life that they claim. They don’t just document the walk of history, the sound of wars and victories; they also go a long way to establish the culture of a city.

Sabah smiling broadly, as we remember her, welcomes you into the heart of her Beirut, Hamra Street. The first impression is of a teeming, overcrowded street, where everyone seems to be in a hurry. You can’t help but stand helplessly amid an unending and deafening stream of vehicles. It could be overall an overwhelming experience, yet if you move slowly through the street, filled with ever-shifting faces, amid the sound of steps that beat like hearts that churn out life, you will see a different facet to it.

Hamra has a heartbeat; it has a soul that is revived every morning by its people and those who claim it for their own. This little street is peopled with spirits, not ghosts, spirits of belonging, spirits of kinship, spirits of sharing life, and spirits of wars passed. You have to look at Hamra through the eyes of an artist. You have to take it in, capture the dirt, the decay, and the beauty on paper. Listen to the sound of sellers and shoppers fading into a steady hum. Depending on the time and day of the week, like any cosmopolitan street, Hamra is claimed by diverse groups of people. In the morning it’s for the children going to school and the mini vans that refill its empty stocks. Around 9:30 the shopkeepers stream through it in a hurry for yet another long day of work and for the older generation of men who linger in its cafes. At night Hamra is for the young, around it bars and pubs mushroom to the rhythm of their own drum. On Sundays Hamra is for all the foreign workers who take their day off, go to church, have lunch with their friends, and buy products from their homeland from little mini markets around it. Hamra is both populous and popular.

As I walk through the crowded street with a rhythm to its thump, all I can think about and all I can see is the face of its people and its shops that make it what it is; places like Red Shoe, Antoine book store, Café Younes, Malek el Batata, Nakhle store, Melki, Domtex, Bata, Librairie Oriental that are institutions amongst which Hamra’s name is built.

As I walk through the crowded city with a rhythm to its thump, I look up at the cables running along the street, weaving in and out of the tops of mish mashed building, all I can think about and all I can see is her spirit, because her presence shuns all of the chaos around, and her heart shines brighter than any street light.

Because Hamra is a melting pot of hearts, it was my childhood and my playground, I #livelovelebanon and I will #fighton