Beirut, always vibrant and bubbling with an air filled with a heady mix of urban pollution and orange blossom, is a city where streets are a living collision of history and glamour.

In Gemmayzeh, Mar Mikhael, Badaro, Monot, the bar walls are often still pockmarked with holes from bullets and rockets. New glass towers soar beside bombed-out ruins. On walls, political posters in Arabic script compete for attention with advertisements for theatre plays, DJ parties, and young graffiti artists. Women in hijabs pull little girls in pink Barbie outfits on plastic scooters, passing teenagers in black leather miniskirts and sky-high stilettos. It’s a zesty brew of East and West, of Christian and Muslim, of Europe and the Middle East, a sort of cultural mish mash with some oomph in it.

In the late ’60s and early ’70s, Beirut was considered the pearl of the Middle East. During its heyday its yacht-graced coastline became a playground for the international jet set, drawn to the city’s pavement cafés, cosmopolitan culture and palpable joie de vivre. The party though was cut short in 1975, beginning of the long Lebanese civil war.

Beirut, a former Phoenician port, is the wild child of the Middle East. It is the nightlife capital of the region. Rooftop nightclubs adorn the coast of the Mediterranean, bohemian districts cater to tourists and local artists, and bars offer an array of exceptional drinks. Nothing has survived civil war, foreign invasion, 1 million refugees, and the fear of suicide bombing quite like Beirut’s club scene.

Beirut’s vibrancy is partly an expression of a Lebanese lust for life, a determination to seize the day after having endured years of war and associated traumas. It’s the fear and frustration of not knowing what is going to happen tomorrow that pushes the Lebanese to live life to the full.

If there is something we know how to do in Beirut and that is how to party. We do it well. We do it so well that Beirut has been on the top list of party cities in the world for the last 15 years. Although some may not see the benefit or the pride in that, but hosting and throwing good parties is an art form that expresses one’s joie de vivre.

Beirut’s parties especially in summer start from early afternoon until sun up the next morning. As the sunrays start peaking in the horizon, partygoers head for the famed 5 am man’oushe breakfast before going back home, because just going home after a long party is not enough in Beirut.

That Beirut will keep on partying, no matter how bad the situation is a cliché that we have created, a PR stunt that pinned Beirut as one of the party capitals of the world. Neither politics nor conflicts will interrupted the life of a Lebanese, a real Lebanese keeps on living. Just like the saying goes “il aweh ma bimout” (the strong doesn’t die)

This city of ours combines beach, history, culture, multi- faith coexistence, and a unique nightlife. At the end of the day “no one parties like the Lebanese, ” I’ve heard it said by so many of my friends when they come to visit.

The overall happiness factor of party nights is evident. Happiness is the best medicine, the best cure and the best precaution because happiness is healthy! What’s important is that you get out and celebrate your life. And no one celebrated life like the Lebanese! 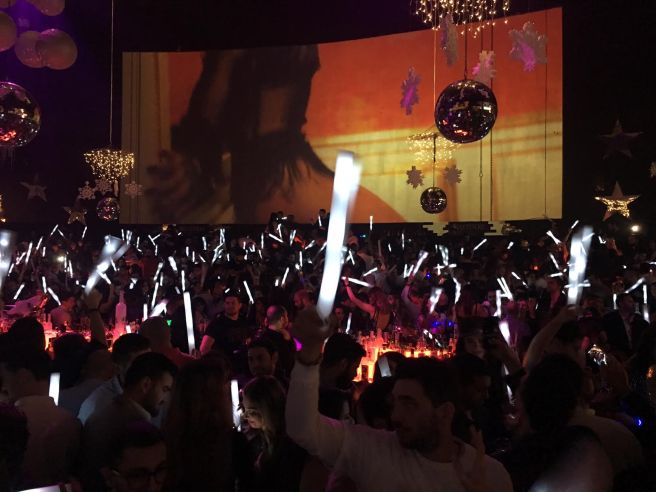 2 thoughts on “The Wild Child of the Middle East”