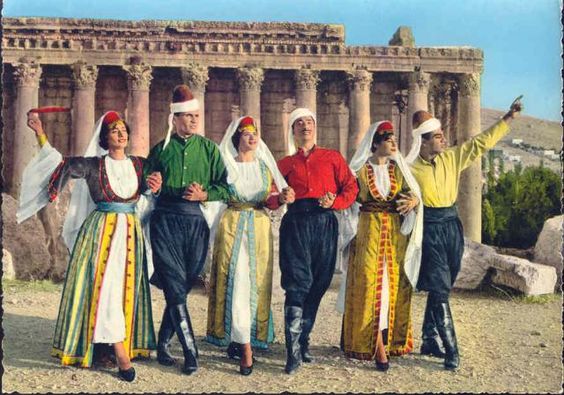 There is something quiet poetic about the Lebanese landscape and how it is integrated in every aspect of our lives. Depending on the region, food, words, dialect, and dress changes. Different religions and areas all have slightly different undertones to their dress and way of life, yet somehow they all seem to mesh together in creating this cultural heritage that is very much what makes this country not only so diverse but so rich in culture.

I’ve been researching for a while on the beautiful heritage of Lebanese costume, and I happen to stumble just last night on this article by al mashriq that I will be posting here:

” Many articles of dress common among peasants and villagers of the Levant survive from ancient styles.

The most significant of these survivals is the sherwal, the very full trousers popularly called baggy pants. The sherwal is a prevalent and practical garment among villagers and mountain people. The richer the wearer the wider is his sherwal and the more fullness it contains to pleat in at the waist. A good sherwal of fine wool worsted may outlast its original owner. The sherwal of the Lebanese man is recognized by its fitted legs from the knees down.

The word sherwal is of Persian origin. Strictly speaking, it is an outer garment. When this style of trousers is worn as underclothing it is called the libas. Some believe the sherwal may have been brought to this country, then called Phoenicia, in the sixth century B.C. by the Persians. That the sherwal was known during the Roman period is indicated by the reliefs at Palmyra which show this garment in vogue then.

Next to the sherwal probably the most distinguishing articles of dress in the Levant are the headdresses. In many villages the headdresses have persisted while other parts of the traditional costume have given way to western styles. A headdress is the surest clue to the sect and religion of its wearer. It also gives an idea of the part of the country the person comes from or the community in which he lives.

The Christian mountaineer of North Lebanon, for instance, wears a high labbade, the conical cap of felted camel’s hair. Around his labbade he wraps a black kaffia and sometimes an agal.

The labbade is a very ancient headdress of ordinary country people. Scholars believe it may have been worn as long ago as Phoenician times. Small Phoenician statues dug up in Lebanon show this same style of conical cap. In modern Lebanon a villager might substitute a red tarboush for the labbade.

A Druze sheikh is recognized by the snowy white scarf he wraps around his tarboush while a Sunnite Moslem sheikh from southern Lebanon characteristically binds his tarboush with a gold and white patterned scarf. The pattern is worked in a stitch called gabani, a type of all over embroidery known since the 18th century.

Of all the masculine headdresses of the Levant, the most familiar to the western eye is the tarboush, elsewhere called a fez. The tarboush always has been of the same basic shape and always red, although its form was slightly modified in different periods. Arabic texts contain the word as early as the 16th century. Its origin has been traced to the parts of Asia Minor where the Ottomans came to power. Popularity of the tarboush in Lebanon, Syria and Jordan is attributed to the Ottoman invasion. After its introduction the tarboush gradually replaced the small local cap known as the taqiah.

Feminine headdress also distinguishes its wearer. The Druze woman is known by her snowy white veil, worn directly on top of her head, or held up by a low tarboush ornamented on the crown by a silver medallion. Moslem women of Lebanon, when veiled, usually wear a black veil of silk.

The most elaborate of all Lebanese headdresses was the tantour, a silver cone worn by married noblewomen. The tantour is obsolete now but one may get an excellent idea of how it was worn from the costumed models at the Beit-Eddine Museum. The tantour was noted by travelers in Lebanon from the end of the 18th century. Its history goes back much further, however. It is thought that it may be one and the same with the tartour described in the tales of a Thousand and One Nights. Also, the similarity of the tantour and the conical headdress of European women from the time of the Crusades through the 15th century has led to the hypothesis that the tantour may have been introduced in Lebanon by the Crusaders.

On the other hand, evidence from the Graeco- Roman reliefs at Kartaba, Lebanon, shows that a sort of cutoff cone headdress with veil was worn in Lebanon much earlier than the Crusader period. The tantour was most popular in the early 19th century. It was seldom seen after 1850. Its height and composition were in proportion to the wealth of its owner. The most splendid tantours were of gold and as high as 30 inches. They were encrusted with diamonds, pearls and other precious jewels. Some tantours were made of silver. To hold this unwieldy headdress in place, holes were pierced in the base of the tantour to attach ribbons for trying around the head. A silk scarf was wound around the base of the tantour and a white veil floated from its peak.

The tantour was the headdress of the married women of the mountains. Young girls wore them rarely, and then only if they were of noble birth. A husband customarily presented the tantour to his bride on their wedding day. Since it was an honored headdress, it is said that it was rarely removed, even for sleeping.

Veils are worn in Lebanon today but not the extent that they were worn a few years ago. Women are accustomed to covering their heads, but whether or not they draw the veil across their faces de pends upon their religion and their position in life. A simple type of small headscarf known as the mandeal is worn by village women. Many of these women have adopted the square of black lace common in European Mediterranean countries to shade the head. Some women of strict religious belief cover their heads and faces with a black veil. Druze women wear a white veil. A Druze may pull this veil across the face so that only the right eye is left showing. Little Bedouin girls wear small bright kerchiefs tied on top of the head and edged with fringe and blue beads for good luck.

One disappearing article of traditional dress in Lebanon is the kubran. A hundred years ago the kubran was a long sleeved bolero jacket while today it remains in the everyday costume only as a brief vest. The jacket is thought to be of Balkan origin. It was worn by the Mameluks in the early 19th century. Until 1850 it was worn mostly by townspeople. After that is was adopted also by mountaineers. The kubran always has been an ornamental garment and traditionally was made of velvet embroidered with gold or silver thread, or of brocade. The seams usually are outlined with braid. The kubrans seen today usually are in the form of a brocade vest richly braided down the front and fastened with a solid row of braid-covered buttons.

The kubran is a garment worn by both men and women. The kubran was worn more for the sake of appearance than just for warmth, while the abaya cloak is very utilitarian. The abaya is a rectangular overcoat worn by men, or it may be the outer garment of certain Moslem women. The abaya has been known in this part of the world at least as far back as the 16th century Mountain dwellers may wear a camel’s hair abaya. It gives protection against both heat and cold and it also sheds water. It can be pulled up over the head in extreme weather or hung loosely over the shoulders.

Another outer garment is the abba. The name covers several designs of coats, but in this part of the Middle East it is generally considered to mean a short sleeved, knee length coat and particularly the one worn by Druze men. A’aqel or wise man of the Druze community may wear a black and white striped abba called the khalwatiye after the Arabic word for meeting place. He may instead wear a red and white striped garment. This latter style at one time was decorated with line embroideries and that embellished abba was known as the shabablikiye or garment of youth. One of the many Druze villages where cloth is hand woven for abbas is Hasbaya.

One of the most typical and enduring styles of shoe to be worn by Levantine women is the kab-kab, a type of clog. It may be seen every where in Lebanon today although made in a simpler form than for merly when it was the fancy dress shoe of the wealthy. It was worn in Lebanon as early as the 16th century and was originally a stilted wooden sandal. Young brides wore the kab-kab six to eight inches high and elaborately inlaid with mother of pearl. The kab-kabs were purposely high to raise the girls to the height of their husbands. This stilted kab-kab was a shoe for indoors but today’s kab-kab is a sandal for both indoor and outdoor wears. It has become a simple clog, which may be gaily painted to suit the fancy.

Pull-on boots handmade of goat leather are worn by country men in Lebanon and Syria. The same designs may be seen in 19th century prints of the area. Many of these boots are dyed solid red or yellow. Black slippers, worn with the backs folded down under the heel and durable leather sandals are characteristic styles of local footwear. Western shoes are now very common.

Authentic original historical costumes are difficult to find. They are scarce for a number of reasons. Many have disappeared through the old upper-class custom of dispensing slightly worn clothing among servants as a form of payment. Garments often were discarded entirely by the rich when they showed any trace of soil. They may have been sold for the value of their jewels and ornaments. ”   text from: http://almashriq.hiof.no/general/600/640/646/costumes_of_the_Levant/origin.html

The Beit-Eddine Museum contains a fine and well-arranged collection of historic costumes of this area.

Druze clerics taking part in a meeting of the sect’s religious leadership in Beirut, Lebanon, Friday, June 12, 2015. Lebanons political leader of the Druze community says this weeks attack in northwestern Syria by al-Qaidas branch that many members of the sect dead was an individual incident. (AP Photo/Bilal Hussein) 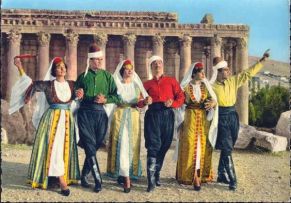 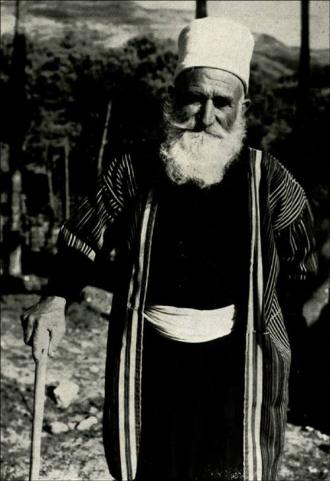 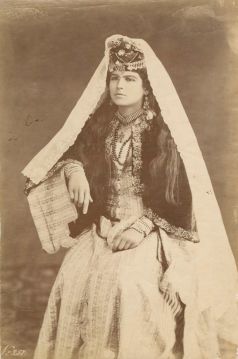