Embroidery has long since been part of the Lebanese heritage of handicrafts. There are some kinds of embroideries like the Oya that most probably have been acquired at the time of the Ottoman Empire. Embroidery in Lebanon is not considered to be a craft as all families, whether peasants, villagers or city-dwellers, practiced it as well as crochet, thus perpetuating ancestral traditions. The young ladies were most hard-working as they had to start preparing their trousseau as of their tenth year. The latter had to contain both embroidery for personal use such as veils, undergarments and dresses, and embroidery items for household use: window, cupboard and closet curtains, bed covers, protective covers for sofas and tablecloths.

Embroidery never declined throughout Lebanon’s history, and thus for a simple reason; this technique did not require costly equipments and was practiced at home. Later, when philanthropic associations decided to help promote and develop this traditional craft, their only concern was to find the right locations that could hold the large numbers of women and young girls interested. Today, embroidery workshops are everywhere in Lebanon, and their production helps support entire families living in remote villages that were once in peril.

“Oya” generally means edging/embroidery in Turkish, which was the primary purpose and could be found on scarves, clothing, and linens. Many regions claim this technique originated with them. The first references date back to before the birth of Christ and may have been influenced by netting done by fishermen. Some versions use a needle and actually create a knot for each stitch.

The most fascinating aspect of Oya is how it was used to convey a message, a kind of language. Keeping in mind this was a region where a woman was expected to remain silent or not to bring up certain subjects, over time, a secret language developed among the women. At a glance they could tell by the color and design of the Oya edging just how the other women felt. Blue indicated happiness but yellow meant you were tired.

If you liked your future mother-in-law you would send her a cloth edged in a “meadows and grass” design. This meant you were as happy as flowers in a spring meadow. If you despised her, you sent a gravestone design, which translated something, like you expected to have a bad relationship with her until death.

The Tark and Oya techniques are specific to workers of the Baalbek region. The tark designates the silver thread embroidery of large scarves, or muslin dresses held in hoops. The fabric, traditionally black, beige or brown, is stretched on a small embroidery hoop. The women at Baalbek have been perpetuating this ancestral handcraft for centuries, most probably since the Fatimid epoch when it was very common to use silver and gold thread in embroideries. Traditionally the fabric used was of dark colors such as black and brown. In Baalbek, the bride would prepare her wedding dress months before the grand day. It was a black muslin dress ornate with handmade tark.

This weaving technique involves a two-millimeter flat silver or gold thread passed through a specialized flat needle. After every stitch, the worker, usually a woman, introduces the needle with the thread in a quick stroke forming the stitch and then the thread is cut. “Tark” means “strike” and it’s made after the needle goes through the fabric forming a hoop. The stitches follow a specific designed shape, mostly geometric. The stand-alone stitches shape into a variety of motifs like cedars, dancers, geometrical figures…

The oya technique is different in that it produces a garland of flowers in a multitude of colors and a variety of forms. It’s an edging technique of lace. These joyful bunches of flowers are usually embroidered on the fringe of a white cotton sheet. This delicate lace is embroidered with a needle and calls for patience and concentration. The technique used by the worker commands to start by stitching the stalk on which are then embroidered the corolla and the petals.

Normal lacework has two dimensions, however, whereas oya can be knitted in three. Oya is an art that involves knitting techniques with the aim of embellishment and decoration. One might also describe oya as a handicraft made by tools such as needles, weaver’s shuttles, awls and hairpins and by using auxiliary objects such as silk, cotton, spangles and beads. It is one of the most elegant examples of handicrafts like thin lacework.

In Lebanon “La Maison de l’Artisan” is an official body that looks after a large number of embroidery workshops, supporting them financially, technically, and helping them sell off their produce.

There is something quiet spectacular about this gorgeous art work, the time it take, the patience, and the dexterity to create such works of beauty. The thing that I find fascinating it’s their humbleness, quiet simple in their design, yet with so much thought and done with much love. 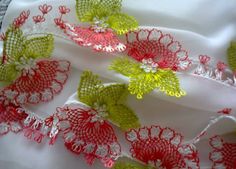 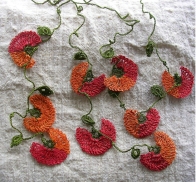 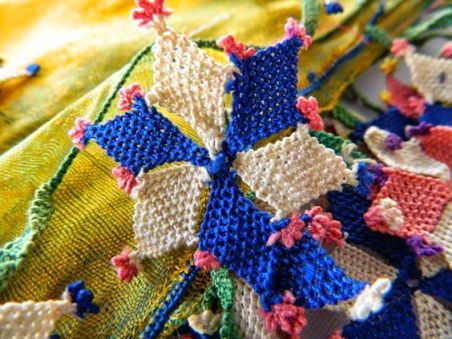