Pastel and earthy sceneries, leave their marks like bullets left on walls. Upon this war torn scenes, a blend of shades and light hear the drawings’ whisper of a war. This beautiful mess captured by Martin Giesen, washed and running flows with his strokes free but damp. They speak of life so light, pale, and tragic, where the wind blows soft in a ravaged war scene. In his faded colors they are but a dream, yet the Mediterranean still breathes a salty, calm  breeze.

On white paper they bleed, and they bled such beauty, their death so tragic, is now such glory. Those  watercolor scenes with shades of grays and blues and whites splattered on a blank canvas an image of a destroyed Beirut. In faded colors they are but a dream escaping from their harsh reality.

Darkened buildings lie ghostly silent on paper afraid to show the good in the world. If there is any at all… Not the truth, though it may be now, it is hidden in between the colours and stokes his heart and hand have chosen. Each element is astutely observed and executed; Giesen turns his watery pigments into textures, reflections, hues and values that make the piece dynamic and vibrant, with a surreal atmosphere.

Born and schooled in Germany, Martin Giesen studied art history at Heidelberg University. After working for the Metropolitan Museum of Art in New York and completing a PhD, Giesen entered into a career of university teaching. He has taught in Lebanon (AUB 1973-85), Saudi Arabia, Canada, and most recently in the UAE where he was founding dean of the School of Architecture & Design at the American University of Sharjah.

For some thirty five years Martin Giesen has made the Middle East his home. His art captures the impact of development on human environment. In descriptive watercolors, Giesen pictorially narrates locations of change: reconstruction in downtown Beirut, busy ports of the Gulf, the clash of tradition and modernity in Dubai, and decaying heritage in Cyprus.

His paintings produced in Lebanon during the years of the civil war received critical acclaim. His work has been shown in solo exhibits in Lebanon, Germany, Canada and the UAE. David Tannous, Washington corresponding editor for Art in America, called Giesen a “contemporary orientalist”. Martin has the ability to “get under the skin” of a place and a culture. His paintings have “spirit” telling a story of a specific environment at a specific time, narratives that are more than just visual illustrative records.

Most of Giesen’s scenes are clearly recognizable representations of particular places, but also appear to have emblematic significance, transcending the boundaries of actual, physical circumstance, inviting the spectator to assign possible meanings to his work, which extends further then the physical objects he depicts.

Giesen’s reaches for greater complexity, evoking a wide range of ideas and feelings that derive from the recent history of Lebanon, a once peaceful and prosperous country ravaged by the misery and destruction of war. Giesen witnessed the country’s gradual decline into confusion and violence, documenting how his environment began to impinge upon his emotions.

Impressed by the ability of the Lebanese to cope with a world which appeared to frustrate their determination to survive, ironically this is still happening today, Giesen seems to have thought for emblems of their courageous spirit in the ruinous environment which bore witness to their collective suffering.

His free flowing watercolor technique render the frank and human approach to his paintings and are entirely in keeping with the scenes he paints. His real subject matter is human life itself. Capturing the agony of Lebanon’s’ civil war, he also gives us hope for the future.

Giesen’s Lebanon, the book,  is a selection of Martin Giesen’s paintings of the country where, from 1973 until 1985, he has made his home. The present selection is drawn from a series of watercolors, executed during the period 1982 to 1984 depicting a variety of Lebanese scenes, including the ruinous remains of downtown Beirut, which constitute perhaps his most powerful work. The paintings are prefaced by an introduction by John Munro, also a resident of Beirut, who in addition has supplied a descriptive commentary for the individual paintings. Besides highlighting the achievement of a talented artist, Giesen’s Lebanon also constitutes an enduring reminder of a beautiful country at a time when it was ravaged by war.

His skill is evident in his brilliant, highly detailed paintings. Using tube pigments to achieve a dense, at times even opaque saturation, he creates a world within a world. A veteran watercolorist, Giesen produces stunningly varied and precise images of architectural scenes, landscapes and maritime settings in which nature often serves as a backdrop to the built environment.

“Lebanon is a cauldron of contrasts, paradoxes and incongruities.” He bemoans “the attempts that are made to cleanse, separate, gentrify and sanctify – as in the quasi-gated community of Solidere – If the rent is too high and access to it restricted, the energy produced by variety is sapped. The result is a monoculture more a thin broth, than a rich stew”. Giesen continues: “My feelings [for Lebanon] are intense as I have spent some of the most tumultuous and happy years of my life in this country, taught a thousand students there, fathered two daughters and hundreds of paintings.”

What dwells in our minds in his watercolor pictures are the fingerprints of time. The paint swirls on the paper like smoke swirling in our lungs, except less deadly and more beautiful. The light brush strokes of the skies and the light falling on a ruinous Beirut are the closest to come to human touch. They are affectionate, gentle, and loving, caressing an old Beirut that we have lost forever. His colors blend unintentionally, wildly with thoughts bleeding outside the lines, of a country gutted with war yet with a resilient spirit.

To my Lebanon that I love, through Giesen’s eyes… 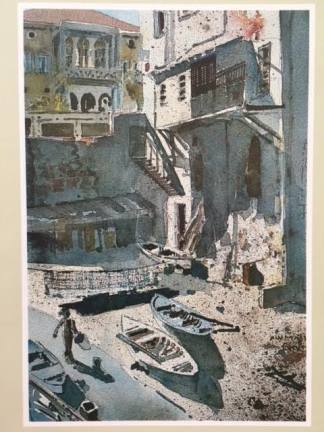 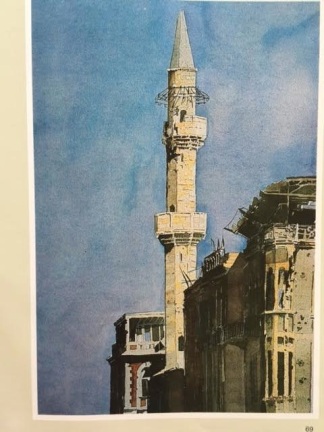 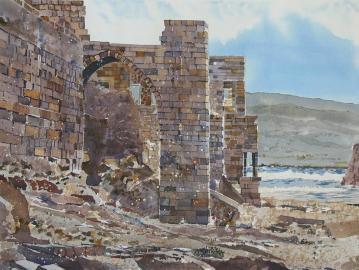