Lebanese pastries are a pure delight. Originally, our ethnic pastries used to be very sweetened. Today, and since a decade or so, they are made with lesser sugar. Lebanese sweets are a landmark in our country’s culinary journey, and are among the best in our region and have landed a world renowned fame for some families who have been in the business for generations.

The origins of Lebanon’s sweets empires are humble. They began as small shops in Saida, Ehden, and the souks of Tripoli. An abundance of sugar and milk in Tripoli and the influences of the Ottoman Empire encouraged confectioners to craft some divine sweets, which one Mohammad Hallab, hallab meaning milkman, came to master over a century ago. In the hands of the third, fourth or fifth generation, these family businesses have expanded and diversified. These tiny confectioneries have morphed into large companies that have several branches within, and even beyond, Lebanon.

During Ramadan, several pastry shops erect stand-alone tents where they churn out kellaj. Fresh dairy cream is layered between phyllo dough in the form of a pocket, fried, dipped in syrup and sprinkled with pistachio and candied rose petals. Resembling an achta-filled turnover and similar to znoud el sitt in composition, kellaj is only available during the holy season. Al Baba, a pioneer in Lebanese sweets with roots in Saida, makes an incredible kellaj.

Lebanon’s northern port city of Tripoli, renowned for its medieval history and great heritage, is also known as the “Capital of Oriental Sweets”, a reputation earned over more than two centuries of producing taste tempting treats. Tripoli boasts a wide array of oriental sweets prepared according to traditional recipes originating from a host of different cultures, especially Ottoman, but which have been revisited and modified.

Unique specialties such as Znoud el Sett (a cream pastry roll close to Italian cannoli), carrying the flirty name of “The Upper-Arms of the Lady, One of my favorites. That name was given to this pastry because of its fine rolls and look, somehow compared to the fine, yet full, woman’s arms. It is made of fine layers of buttered wheat-flour which resulting dough resembles the filo texture. That dough is wrapped tightly around the Ashta cream in rolls that are fried to golden-brown crispiness. When done, they are dipped in sugar-syrup flavored with rosewater or orange flower water.  It is best to serve it hot to maintain its crispy texture. When ordering your Znoud El-Sit, you will know if it is fresh by that warm yet crispy texture.

Halawet el Jibn, another Tripolitanian specialty is anotherone of my top favorite Lebanese pastries! I can’t express how delicious it is. Halawat El-Jeben means literally the sweet of the cheese . The main components of the dough are cheese, semolina and sugar. The soft dough is wrapped around fresh Ashta Cream and topped with Aleppo nuts, and, as an option, some rose-leaf jam. Lebanese sugar-syrup, flavored with rosewater, is set on the side, leaving it to the person to pour it over their rolls as much or as little as desired.

A visit to Tripoli is not complete without a stop at one of its many sweets shops, some of which operate in their old premises in arcaded souks inside the old city, the way they have for more than a century. Tripoli’s sweets industry is a series of family businesses passed down through generations, with each family becoming famous for its special sweets. Kasr al Helou (Palace of Sweets) of Abdel Rahman Hallab and Sons is one of the most prominent.

In the past, Tripoli was famous for its sugar cane production. The big surplus in sugar was a main factor in shaping the city as a hub for the production of oriental sweets, which were originally prepared at home by housewives competing over who would make the best dessert. Many owners of sweets shops trace their family businesses to the 19th century when great-grandfathers sold sweets on handcarts.There were influenced by interaction with surrounding cultures. For instance, the Palestinians of Nablus who were famous for their Kunafa Nabulsi, a local dessert prepared with a local cheese, transmitted the know how to the people of Tripoli, who introduced amendments to the original recipe and changed its name to kneife Taraboulsiye in which they replaced the imported cheese with a local one and created a new version with cream.

Sweets were traditionally made on special occasions, such as weddings and births, to mark special events such as religious feasts and during the Muslim fasting month of Ramadan and when prominent guests visited the city. Some sweets were created and named for visiting dignitaries. Faysaliya, was named after Prince Faysal (future king of Iraq) and created on the occasion of his visit to Tripoli in the 1920s.

The high quality of ingredients used in sweets production is at the core of Tripoli’s reputation. Some components are imported and others produced locally. Ghee is brought from Romania, milk is either local or imported from Bulgaria, pistachio comes from Iran, whereas pine nuts are local.

For the Haddad family, their speciality is Halawa shmaysiya, which consists of Turkish Delight (lokum) cooked in local cream and powdered sugar. This type of sweets is only prepared by their family. It is an exclusive creation that can only be found in their shops with a recipe that was inherited from their ancestors.

On the other side of Lebanon though, it was the Bohsali family who, in the middle of the 19th century, first “Lebanised” Turkish and Greek sweets. Back then, they had a little shop near the port, and the owner, Salim, came across baklava in shipments from Turkey and Greece. The sweets were a big hit among Beirutis and, in time, Salim learned to make his own. Soon, he and his son had expanded their repertoire, and the store’s reputation began to spread. In 1914, while Lebanon was still under Ottoman rule, it was officially appointed supplier to the king. The sweets began to grab the attention of the Lebanese bourgeoisie, who had until then ordered their baked goods from swinging Cairo, making the Bohsali family world renowned in the making of baklawa (baklava). Ghoraybeh, an off-white, crumbly biscuit made with butter and flour. Whether bought in or homemade, the pastry can either be large or small, the small ones are only slightly bigger than a nut. Again, it was the Bohsali family who were behind both the size and initial popularity of ghoraybeh.

The many other Lebanese pastry worth mentioning and trying:

Knafeh that comes in two versions: filled with cheese or with Ashta cream, the latter being mostly a Northern recipe and must be eaten fresh. This is another of our ethnic pastry that is made of semolina. A no non-fattening pastry, the Knefeh is super delicious and fulfilling. In the North, they are famous of their Ashta Kanafeh that they eat for breakfast, placed inside the Lebanese Sesame kaak-bread, and eaten warm.

Attayef, with Ashta cream or stuffed with nuts and fried is made of Wheat Flour and Yeast, baked in small-medium round shapes, then filled with Ashta cream, and eaten with Sugar Syrup. It is mostly available at sunset onward during the Islamic fasting season of Ramadan. The Attayef comes also in a different, richer version: The Attayef with nuts. This one is made in a larger round shape closed tightly on a mixture of sweetened nuts. It takes the shape of half-moon. We fry them then soak them for a while in Sugar Syrup that is flavored with rose-water. Kattayef is an interesting derivative of the verb Kattaf, meaning “to pick”. With both its size and shape, this pastry is picked by hand from the plate and eaten, hence its (plural) name Kattayef, or Attayef.

Mafroukeh, the term Mafroukeh derives from the Arab verb “faraka” that means “to rub”. Mafroukeh translates into “has been rubbed”, which is how the semolina of this pastry is made; rubbed continuously with butter (and sugar) until it gains texture and consistence.  The solid cream remains granulated yet soft. A thick layer of Ashta cream is spread all over it. Almonds, nuts and Pine kernels are not only toppings. They are part of the delicious taste of this pastry. No usual sugar-syrup for this one. It is already sweetened!

Maakron Saint Barbara, is made of wheat flour, semolina, sugar, vegetable oil, baking powder and and infusion of anise and fennel seeds. It is then soaked in sugar syrup. In the christian communities all over Lebanon, the 4th of December is a day for the Maakron making. “It’s the Berbara! I am making Maakron!” is what you hear the most that day. The reason of this pastry being connected to the Christian martyr Saint Barbara (300 A.D.) is not documented. Traditions speak of the correlation of the wheat with her miracle in the wheat field, hence the Maakron is made in her memory, along with another wheat-based dessert called the Burbara. Both sweets are offered that day to children passing from house to house in disguise, and singing Eid El-Berbara, and a slogan calling Saint Barbara to feel.

Jazarieh, a derivative of the word Jazar (Carrots) although the recipe does not contain any carrot, was mainly named as such because of its color. In fact, Jazarieh is made of pumpkin, flavored with lemon and orange juice, and sweetened. It is then mixed with a variety of nuts, like walnuts, pistachios and almonds. Slight differences are seen in the presentation, and in the choices and quantities of nuts. It is a very delicious sweet that could be served as a jam type, or in more solid pieces of cake, which I prefer for being less sweetened and more consistent.  Jazarieh was mainly made in that city of Batroun.

Around this time of the year, flat trays from the sweet shop fill Lebanese homes. One tray will be filled with a dizzying array of baklava, all drenched with sticky syrup made from sugar, water and orange blossom, and sweets cooked with a heavy ashta (clotted) cream. The other will hold several kilos of maamoul, meaning it is made, probably named for the amount of time it takes to individually make each. It’s a traditional semolina-based pastries that come individually wrapped. The baklavas would be reserved for the family, but the dozens of maamoul will be duly handed out, along with a steaming cup of Arabic coffee, to the many visitors who would come over the Eid to wish good fortune. According to Lebanese tradition, guests should be served a meal before the maamoul are passed around. Guests will either eat the maamoul there and then, or take some home, savoring this crumbling, shortbread-style pastry filled with either crushed walnuts, almonds and pistachios or crushed dates, and then covered with powdered sugar. As for Christians, tradition dictates, women would gather a few days earlier during Christian festival of Easter and begin the ritual of making their version of maamoul. These are similar to the Muslim kind, just smaller. Unlike the Muslim version, however, the Christian maamoul are not wrapped. They are eaten on Easter day itself, as a way to break the 40-day Lent. Today, such traditions remain relatively unchanged.

Whichever sweet is being offered, however, no visit to a Lebanese home is complete without a cup of hot Arabic coffee, an “ahla wo sahla tfadoloh (please come in, you’re welcome, have some), and a pure display of Lebanese unmatched generosity.

To my land of milk, honey, and sweets! 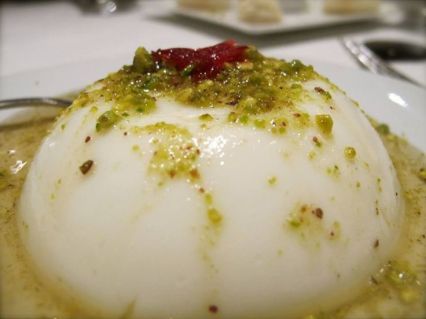 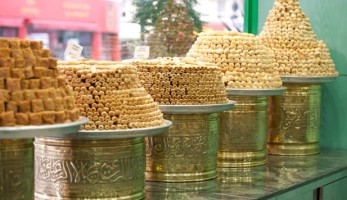 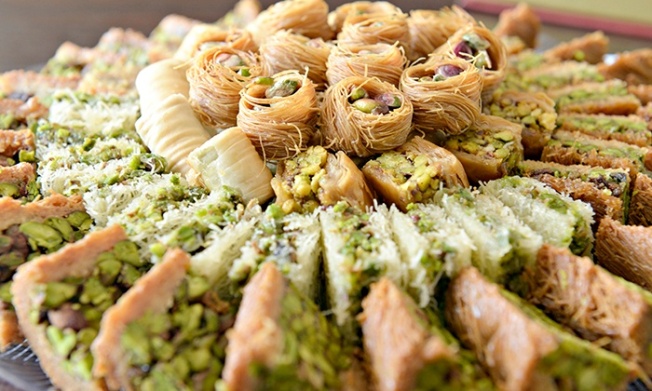