A certain calmness starts to take over our Beirut’s mornings today as the first day of Ramadan is upon us. Today many Lebanese start fasting, praying more earnestly, watching what they say, thinking twice before speaking, being kinder to their families and friends, contemplating on life, respecting, laughing, and loving. The month of Ramadan begins with the sighting of the new moon, which varies from country to country.

During the holy month, Muslims, face a strong test of their will, having to abstain from eating and drinking from dusk till dawn. As the holiest month of the year, it is a crucial period for practicing Muslims and underpins some of the religion’s core values, such as prayer and giving to charity.

Muslims believe Prophet Mohammed received a series of revelations from God, which combined to form the Koran. They believe the Koran was revealed during the ninth month of the Islamic calendar, Ramadan. Many Muslims will try and recite as much of the Koran as they can during Ramadan.

Fasting (sawm) is one of the five key pillars underpinning the Islamic faith. The others are prayer (salat), giving a percentage of your salary to charity (zakat), making the Hajj pilgrimage to Mecca and, of course, a belief in the Muslim faith (shahadah).

Muslims will wake up before sunrise for morning prayer and to eat before the day’s fast begins. Most will break their fast alongside their families in the evening with a communal “Iftar” meal, typically often started with dates.

Lebanon’s vegetable stands, sweet shops, bakeries and butchers start heaving with customers as people assemble the necessary ingredients for the first iftar of the holy month of Ramadan. Juice stalls start pouring water on brown sacks filled with licorice and drain the brown liquid into a large bucket to make soos, a popular drink during Ramadan.

The smell of traditional dishes served during Ramadan will start to fill Lebanese homes tonight as the night air fills with a certain quietness that is uncommon to Beirut’s nights. Dates are first served as Fattoush, diced vegetables mixed with pomegranate molasses and olive oil, lentil soup spiced with cumin and with other small mezze dishes including fatteh (yogurt and chickpeas), and cheese-filled sambousek are all placed on dining tables. The air of tranquility and enjoyment around the table is quite different from other times of the year, as one contemplates life’s simple necessities and pleasures.

In Lebanon, Ramadan festivities are enjoyed by all communities and they are not restricted to Muslims only. Charities, civic organizations and businesses host iftar dinners for fundraising purposes to which guests from various religious communities and denominations are invited. Fasting has become a family and social tradition, part of the heritage, customs and traditions of our country.

Globalization has not touched certain customs in Lebanon. Across the southern coastal city of Sidon and Tripoli, the spirit of Ramadan is felt as centuries-old traditions are  revived. Mohammad Fannas, a musaharati, a Ramadan drummer, pounds on his drum to wake residents to have an early meal, the suhoor, the last meal that Muslims have before beginning their day-long fast. Emerging from a dark alleyway on the northern side of Lebanon, Rodwan Mahmoud Al Zahed, walks around the streets of the Lebanese city of Tripoli beating his drum and singing songs praising God and the Prophet Mohammed. This is part of an age-old tradition that dates back to the Ottoman era. At times people stop to give him money for the work that he’s doing during the holy month. Al Zahed doesn’t see his task as a profession, but as way to carry on a tradition. “It is a heritage more than it being a profession, it is a kind of worship, because we are paid by doing things related to the praising of the oneness of God, and praying for our dear prophet Mohammed, peace be upon him.”

For thirty days duties that come with fasting, such as the special prayers to be observed for each day and spending the Nights of Power (Qadr) in the mosque, are practiced by Muslims of all sects in Lebanon. Eid al-Fitr brings to a climax a month of Ramadan rituals intended to draw Muslims closer to their families and to God with children in the villages of Lebanon celebrating with firecrackers and wearing their nicely chosen clothes for the occasion.

Certain rituals start to form around that time as cars and mopeds dart around their neighborhoods rushing home before the sun sets but by sunset these same streets become desolate as families gather to break their fasts together.

This beautiful months of festivity, of families coming together, of giving, and being merciful is a time to embrace the real spirit of the holy month. Beyond the hustle and bustle of the streets and the exhaustion of every day life, the month of Ramadan brings a certain peacefulness to the air as people go about their lives a little bit slower and the air is filled with a certain kind of tenderness to one another.

To see no evil

To hear no evil

To speak no evil

To empty our stomachs so we’ll feed our souls

To help the poor and the needy

To open our hearts

To forgive and be forgiven

To unite with our loved ones

Ramadan Kareem to all 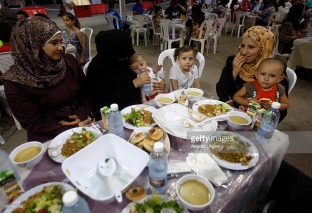 BEIRUT, LEBANON – JUNE 29: Muslims gather in iftar tents to break their fast on the first day of holy month Ramadan in Beirut, Lebanon on June 29,2014. Islam’s holy month of Ramadan is celebrated by Muslims all over the world marked by fasting, abstaining from food, beverage and smoking from dawn to dusk. (Photo by Bilal Jawich/Anadolu Agency/Getty Images) 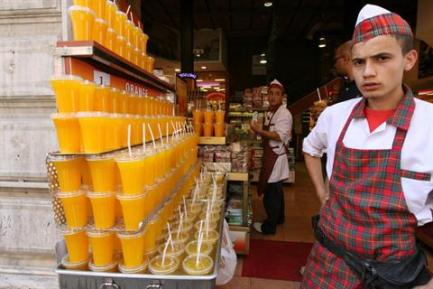 epa02887654 Spectators watch fireworks during the Eid Lamp ‘Fanous’ is switched on a day before Eid Al-Fitr in front of Mohamed al-Amine Mosque at downtown of Beirut, Lebanon, 29 August 2011. Eid Al-Fitr is one of the most important feasts on the Muslim calendar that marks the end of the Muslims holy month of Ramadan. The Eid Lamp ‘Fanous’ is a traditional Ramadan lantern. EPA/WAEL HAMZEH