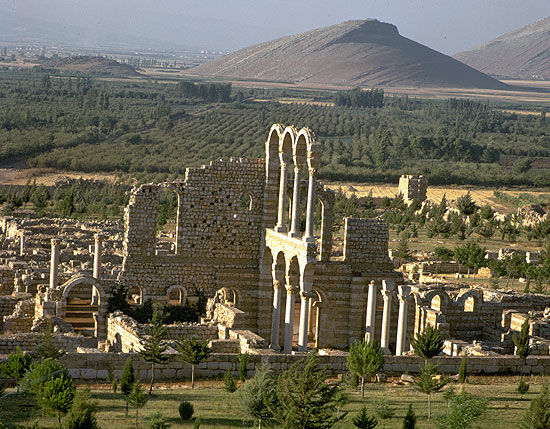 Aanjar has a special beauty. The city’s slender columns and fragile arches stand in contrast to the massive bulk of the nearby Anti-Lebanon mountains, an eerie background for Aanjar extensive ruins and the memories of its short but energetic moment in history.

Anjar is exclusively one period, the Umayyad. Lebanon’s other sites were founded a millennia ago, but Anjar dates back to the early 8th Century AD. It also stands unique as the only historic example of an inland commercial center. The city benefited from its strategic position on intersecting trade routes leading to Damascus, Homs, Baalbeck and to the South. This almost perfect quadrilateral of ruins lies in the midst of some of the richest agricultural land in Lebanon. It is only a short distance from gushing springs and one of the important sources of the Litani River. Today’s name,”Anjar” comes from the Arabic ‘ayn al-jaar, meaning water from the rock, a reference to the streams that flow from adjacent Lebanon and the anti-Lebanon mountain range. The ruins have been recognized as a World Heritage Site.

The Umayyads, the first hereditary dynasty of Islam, ruled from Damascus in the first century after the Prophet Mohammed, from 660 to 750 A.D. They are credited with the great Arab conquests that created an Islamic empire stretching from the Indus Valley to southern France. Skilled in administration and planning, their empire prospered for a 100 years. Defeat befell them when the Abbasids, their rivals and their successors, took advantage of the Umayyad’s increasing decadence. Some chronicles and literary documents inform us that it was Walid I, son of Caliph Abd al-Malik ibn Marwan, who built the city, probably between 705 and 715 A.D. Walid’s son Ibrahim lost Aanjar when he was defeated by his cousin Marwan II in a battle two kilometers form the city.

To sense the vastness of the city, drive around the outside of the fortified enclosures before entering the 114,000 square-meter site. This city bears outstanding witness to the Umayyad civilization, a fortified city surrounded by walls and flanked by forty towers, and a rectangular area. Dominated by gates flanked by porticos, an important North-South axis and a lesser East-West axis, superposed above the main collectors for sewers, divide the city into four equal quadrants. Public and private buildings are laid out according to a strict plan: the great palace of the Caliph and the Mosque in the South-East quarter occupies the highest part of the site, while the small palaces (harems) and the baths are located in the North-East quarter to facilitate the functioning and evacuation of waste waters. Special service, craft areas, and living areas are distributed in the northwest and southwest quarters.

Anjar was never completed, enjoying only a brief existence. The evolution of certain protobyzantine styles towards a more developed Islamic architecture is apparent in the building techniques as well as in the architectonical and ornamental elements employed. The ruins are dominated by spectacular vestiges of a monumental tetrapyle, as well as by the walls and colonnades of the Umayyad palace, three levels of which have been preserved

At its peak, Anjar housed more than 600 market arcades separated by columns in the typical Roman-style, as well as bath houses, two palaces, and a mosque. Vestiges of the city of Anjar constitute a unique example of 8th century CE urban planning carried out at the beginning of the Islamic period. The nature of its ruins marks an evolution over time from a proto-Byzantine culture to the early development of Islamic art, evidenced through the presence of various construction techniques and decorative elements captured in its monuments. These structures incorporate decorative or architectonic elements of the Roman era, but are also noteworthy for the exceptional embellishing techniques of contemporary decor within the construction.

The masonry work, of Byzantine origin, consists of cut stone alternating with courses of brick. This technique, credited to the Byzantines reduced the effects of earthquakes. The tidy division of the site into four quarters is based on earlier Roman city planning. At the city’s crossroad, Tetrapylons mark the four corners of the intersection. This configuration, called a tetrastyle is remarkably reminiscent of Roman architecture. One of the tetrapylons has been reconstructed with its full quota of four columns. The Greek inscriptions at the bases and the Corinthian capitals with their characteristic carved acanthus leaves are not original to the Umayyads.

The columns of the arcade are by no means homogeneous; they differ in type and size and are crowned by varying capitals. Most of them are Byzantine, more indication that the Ummayyads helped themselves to Byzantine and other ruins scattered around the area. The second palace is decorated with much finer and more intricate engravings, rich in motifs borrowed from the Greco-Roman tradition. Very little reconstruction has been done to this palace so its floors and grounds are in their natural state, as you’ll find stone carvings of delightful owls, eagles, seashells and the famous acanthus leaves. More evidence of the Umayyad dependence on the architectural traditions of other cultures appears some 20 meters north of this second palace. These Umayyad baths contain the three classical sections of the Roman bath: the vestry where patrons changed clothing before their bath and rested afterwards, and three rooms for cold, warm and hot water. The size of the vestry indicates the bath was more than a source of physical well-being but also a center of social interaction.

In the heart of the Bekaa valley lie silent ruins witnesses of a great civilization that once ruled the land. As you stand there with the eerie silence of a civilization gone by, try to take in the beauty of its architecture that was build by borrowing different styles in order to create this metropolis. 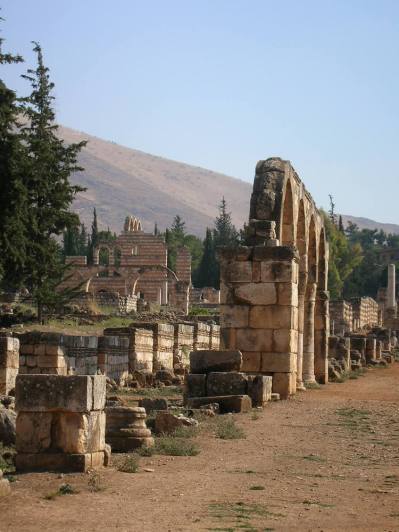 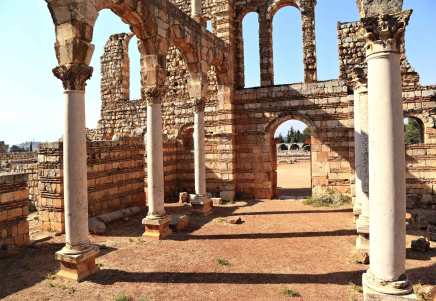 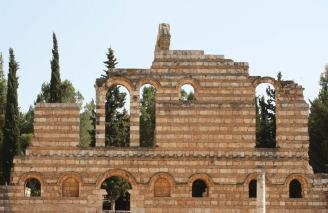 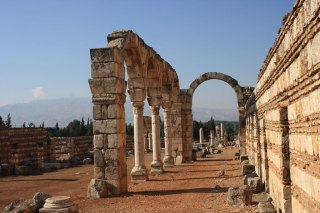