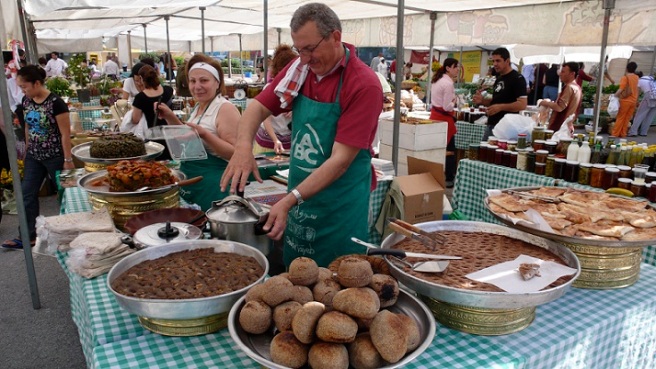 Every waking thought fueled by juicy strawberries not from distant lands, stalked by native asparagus, pine nuts, oak honey, dried apricots rolled thin into sheets, zaatar, ‘the sheikh’s’ raspberries, eating a Man’oushe from Rima’s saj, and buying my boys kale chips from Biolicious, pushes me out of bed on Saturday morning heading to Souk el Tayeb.

On the same location where 41 years ago war was raging in full frenzy with people from different sects killing each other, now stands Souk el Tayeb in the new Beirut Souks area. Where hatred and fear of the other ruled and destroyed a country, now the love of food and land unites it, erasing invisible barriers and uniting communities. Natural-homegrown food lies in checkered green and white stalls, loving sold by passionate people who toil their land with regard, safeguarding one of the longest living traditions of this country.

Between innovation and tradition, Souk el Tayeb, meaning the market of good, is a place where a sense of community is experienced around food value and culture. Founded by Kamal Mouzawak in 2004, it is part market and part educational kitchen (called Tawlet, where a cook will purvey a buffet of her regional cuisine), all with the goal of promoting rural agriculture, preserving Lebanese culinary traditions, and “making food, not war.” It’s a place where cooks, many of them women, from Lebanon’s whole spectrum of backgrounds, regions, and religions come together to cook and share what they’ve cooked.

Kamal created the first farmers’ market in Beirut which preserves food traditions and the culture of sustainable agriculture in Lebanon, working to protect the interests of local small farmers and producers in Lebanon, enabling them to sell their products directly at the market, thus ensuring a fair price for their goods.

In the five years since its founding, Souk el-Tayeb has grown into a food movement. Lebanon’s tumultuous history of diversity and conflict has resulted in low agricultural production, massive internal migration, inadequate agriculture policies, and ethnic divisions. For each of these problems, Kamal’s approach is part of a solution. Branching from Souk el-Tayeb, Kamal has begun a farmer visit and exchange program, a cultural tourism program, a producer restaurant, educational programming for youth, and inclusive national festivals to promote reconciliation in Lebanon.

Serving as a platform for the people of Lebanon to forge a unified Lebanese heritage and identity based on their shared cuisine, it’s a place where regardless of the religion or ethnic heritage (Druze, Shiite, Sunni, Maronite, Greek Orthodox), the diverse people of Lebanon are united around the experience and pleasure of food. While it is based in Beirut, due to Lebanon’s compact size, farmers from the Niha Mountains to costal Saida can join together at the weekly farmer’s markets. Dressed in his traditional garb of black baggy trousers, Hussein Abu Mansour from a Druze village in the Bekaa Valley has zingy glasses of grape and pomegranate juice. Suzanne Doueihy from the Christian Maronite town of Zgharta in northern Lebanon is the country’s acclaimed ‘Queen of Kibbeh’, and her baked dish of kibbeh bi labneh layers ground lamb with yoghurt and pine nuts. Armenian dishes from Beirut’s Sonia Tikidjian include lahme bi ajine, and Maurice Habib’s fragrant honey is from Lebanon’s famed cedar forests.

Using cuisine traditions and customs as a unifying social and cultural catalyst while also empowering and generating income to small-scale farmers and local communities through food, Souk el Tayeb is bringing us all together for the love of food and a pride in our culinary heritage. 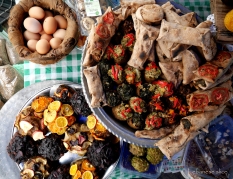 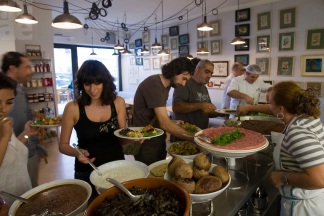 Guests help themselves to the buffet at Tawlet on November 11, 2010 in Beirut, Lebanon. Photo by Jamie McDonald 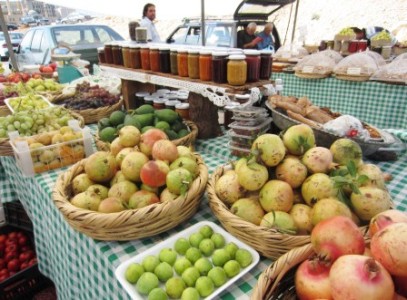 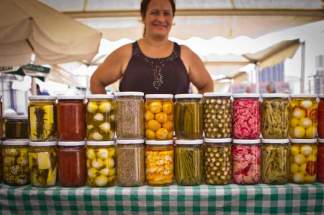