Among the valleys and hills of Quzhaya, lies The Monastery of Saint Anthony the Great (Mar Antonios al-Kabir). The pine trees and oak trees cover the great hills surrounding it. Fruit trees of all kind grow all along the valley, which extends into the Valley of Qannubin to form the great Qadisha Valley.

Historians and scholars suppose that this monastery began to be occupied by hermits at the beginning of the fourth century. It was looted several times, set on fire and razed to the ground, but there still remain vestiges dating back to the seventh century.

In 1585, the first printing press of the Middle East was installed in this monastery. No other books followed from the press and almost a century elapsed before the first book was printed in Arabic in the Middle East, again in Lebanon.

A movable type printing press was imported from England to the Saint Antonius Monastery in 1585. The first publication was the book of “Mazameer” dating from 1610, and now present in the University of the Holy Ghost in Jouniyé.

Saint Antonius press’ first book was printed with Syriac letters instead of Arabic ones. Back then Lebanon was still under the Turkish occupation, and at the time, the Arabic script was considered sacred, only to be written by hand not to be reproduced in the printing press. Christian monks tricked the Turkish government and printed Arabic Christian religious books (like The Book Of The Mass, The Book Of The Apostils and several others) using the Syriac letters. The word “karshouné” was given to this kind of printing when the Syriac letters were used to write Arabic text. Nowadays we still use the word “karshouné” only to imply that a person is talking nonsense or that his pronunciation and handwriting are undistinguishable.

The book printed was a bilingual Psalter in small folio of 260 pages. Besides the title page, the little book contains an introduction by Sarkis al Rizzi, the Maronite Archibshop of Damascus, 151 psalms, the ten Biblical odes (tasabih), the imprimatur by the Archbishop of Ihdin to whose diocese Quzhaya belonged, and a concluding colophon. The psalms are arranged in two columns, on the right is the text in Syriac and on the left in Arabic, but written in Syriac letters, the so-called karshouné script. As the Arabic version is longer than the Syriac one the wish to keep both texts parallel caused the use of two different fonts, larger ones for Syriac and smaller ones for Arabic. Both sets of types are elegant and harmonious and are cast after a calligraphic model of high quality.

The press was renewed in the beginnings of the 19th century and a special place called “al ma3rama” was reserved for it in the monastery. In the year 1854 the work of the press was stopped due to the situation back then, to be renewed again in 1871 and then to stop completely in the beginning of the Second World War. Nowadays the printing press in Saint Antonius monastery is not very well preserved. There are only the English printing press displayed, some books around it, a few Syriac metal letters typeset in a matrix, and some printing tools that were used in the press.

Quzhayya in Syriac means the treasure of life. How befitting that among this wondrous landscape between heaven and earth, rests Quzhaya’s monastery that printed its first book in Syriac, gifting it this beautiful name.

Lebanon spread the first alphabet, printed the first Syriac and Arabic books in the Middle East. One can’t help but marvel at the legacy of education present in this land, that every Lebanese carries deep within his roots. 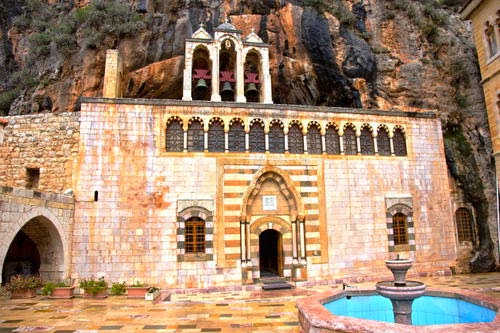 2 thoughts on “The First Printing Press”