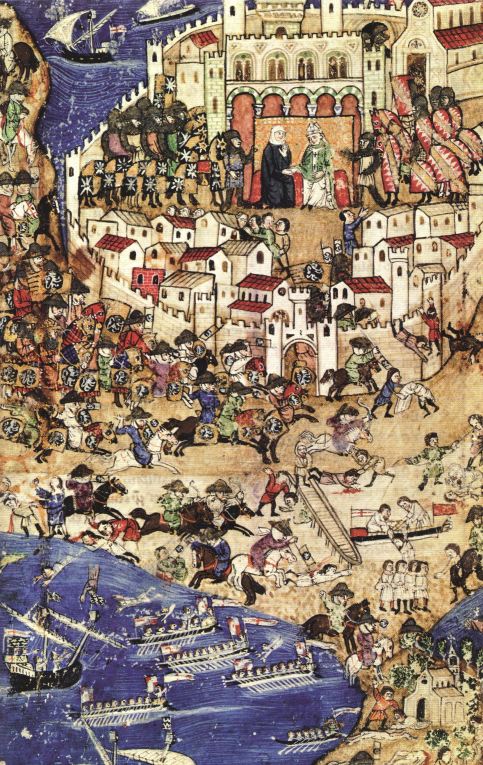 Lebanon’s second largest city is famous for its medieval Mamluk architecture, including a bustling and labyrinthine souk that is considered the best in the country. Home to the largest fortress in Lebanon, the Citadel of Raymond Saint-Gilles, it’s the second largest city (behind Cairo) in Mamluk architectural heritage. In ancient times, it was the center of a Phoenician confederation, which included Tyre, Sidon and Arados, hence the name Tripolis, meaning triple city in Greek, which the Arabs changed to Trablous.

The conventional wisdom of the 13th century held Tripoli under the Crusaders to be unconquerable. Capital of one of the four Frankish states since 1109, it was an Eastern Mediterranean port some 2000 years old, where Venetians, Genoese, Arabs, and Ottomans ran shipyards, fisheries, olive-oil presses, textile shops and orange groves. Its sugar traders were famously innovative, and were among the first to arouse Europe’s sweet tooth.

The Mamluk Sultan Al-Mansur Sayf al-Din Qala’un took major Frankish strongholds in 1285 and 1287, and when internal rivalries weakened Tripoli’s defenses, he saw his chance. In response, Tripoli’s Commune and nobles gave supreme authority to Lucia, the countess of Tripoli. In the spring of 1289, he led his army north, deploying a huge force about Tripoli’s walls. The Venetians fled the city first, fearing that the Genoese might take all the ships. The siege lasted for five weeks, and thus begun 227 years of Mamluk rule. The population of the city was massacred, although many managed to escape by ship. Lucia managed to flee to Cyprus.

Tripoli was razed to the ground, and Qala’un ordered a new Tripoli to be constructed not at al-mina, but instead under the brow of the citadel. This was both strategic and sensible. To the Crusaders the citadel was a military fortification that they first used to besiege the Arab city and later to guard the coastal center. But to the Mamluks, a citadel was always a social and political unit as well as a military one. The Mamluks were very much afraid the Europeans would return which gave them good reason to build inland rather than right on the coast. But that was not their only reason; it was also their tradition, which they had developed in Cairo.

Defense was hardly the sole consideration in their city planning. Mosques, schools, baths and khans in the center of the main markets were built next to each other to allow traders, travelers and visitors to go to the mosque together, or attend the nearby school.

In addition, the nature of crafts and trades determined assigned locations for each of the specialized markets. The more prestigious and refined ones, such as the cloth, gold, perfume, shoe and confectionery souks, clustered close to the Great Mosque; the loud or smelly ones, such as the coppersmiths’ and tanners’, were situated where they would be least likely to distract those who gathered for prayer.

The urban form of Mamluk Tripoli was dictated mainly by climate, site configuration, defense, and urban aesthetics. The layout of major thoroughfares was set according to prevailing winds and topography. The city had no fortifications, but heavy building construction characterized by compact urban forms, narrow and winding streets for difficult city penetration. Residential areas were bridged over streets at strategic points for surveillance and defense. The city also included many loopholes and narrow slits at street junctions.

And so begins the story of Tripoli and its beautiful architecture, a magical place where every corner of the old town narrates a story of a city that once boasted one of the most beautiful architecture of its time. It lives inhabited for the last 2000 years with its artisans that have learned from generation past the splendor of their crafts.

I love the battle scene, so here is a detail of it. Imagine this battle scene on the shores of Tripoli all this blood shed… 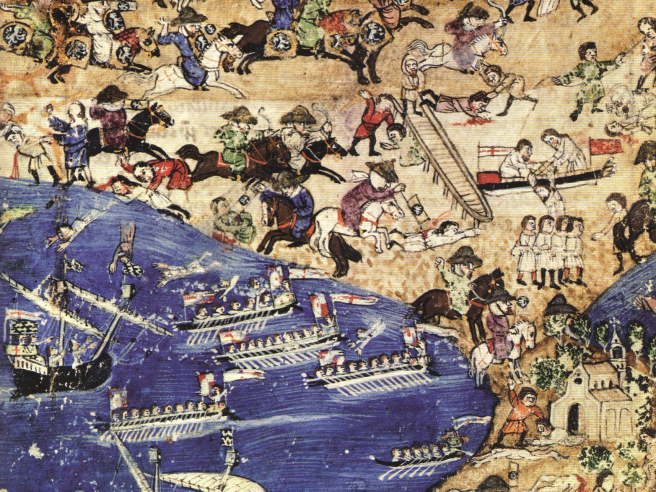 One thought on “The Fall of Tripoli”