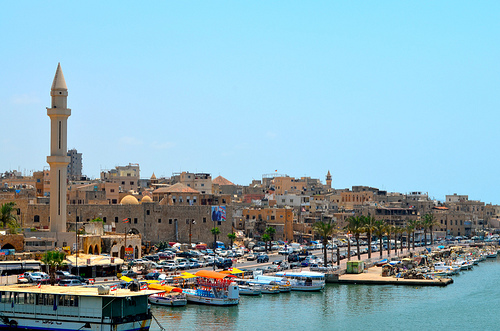 Saida, Arabic for fishing, takes its name from the old Phoenician word sidouna, also meaning fishing. In Genesis Sidon is a son of Canaan, a grandson of Noah. One of the most important, and perhaps the oldest, Phoenician cities dating around 4000 B.C., and perhaps even earlier, in Neolithic times, it was twice destroyed in war between the 7th and 4th centuries B.C., and again during the earthquake in the 6th Century A.D. It was the base from which the Phoenician’s great Mediterranean empire grew. Of all of Lebanon’s cities this is the most mysterious, for its past has been tragically scattered and plundered.

In its wealth, commercial initiative, and religious significance, Sidon is said to have surpassed all other Phoenician city-states. Sidon’s Phoenician period began in the 12th – 10th century B.C. and reached its height during the Persian Empire (550 – 330 B.C.). It was during this time that the temple of Eshmoun was built. Glass manufacture, Sidon’s most important enterprise, was conducted on such a vast scale that the very invention of glass has often been attributed to it.

Like most Phoenician cities, Sidon was built on a promontory facing an island, which sheltered its fleet from storms off the sea, and became a refuge during armed incursions from the interior. And like other Phoenician capitals, Sidon suffered the depredations of a succession of conquerors. At the end of the Persian era, unable to resist the superior forces of the emperor Artaxerxes lll, the desperate Sidonians locked their gates and immolated themselves in their homes rather than submit to the invader. More than 40,000 died in the flames. Shortly after, in 333 B.C., the decimated city sued for peace with Alexander the Great. After that it was the Byzantines that claimed it and in 667 the Arabs. In 1111, Sidon was besieged and stormed by the Crusader Baldwin, soon to become King of Jerusalem. In 1187, the city surrendered to Saladin, but was re-occupied by the Crusaders, later passing into the hands of the Saracens. The Templars recaptured it briefly before abandoning it for good in 1291 after the fall of Acre to the Mameluk forces. It flourished once more during the 17th Century when Fakhreddine lI, then ruler of Lebanon, rebuilt it.

Classical literature abounds in references to Sidon. It is mentioned in the poems of Homer. Virgil, in the Aeneid, speaks of Dido, Queen of Carthage, who was Sidon-born. In the Bible, it is referred to as the most ancient of the Canaanite coastal cities. This is where Jesus cast the devil out of the Canaanite woman’s daughter. Literary and scientific publications of the 19th Century, which looked upon Phoenicia as the precursor of all civilization described it as the cradle of the humanities and the arts.

Sidon is of immense antiquity, but few remains of the ancient city have survived the ravages of time and man. In the 19th century, treasure hunters made off with many of its most beautiful and important objects, some of which can now be seen in foreign museums.

Oscar Wild once wrote, “In amorous Sidon was thy temple built over the light and laughter of the sea.” As you walk into the city, Saida’s repository of many ruins, which reflect the various civilizations and cultures that inhabited the city, will hymn its historic destiny. It has much to say in between its old alleys, mosques, souks and day-to-day life. Yesterday’s, Phoenician world soars below today’s, with captivating relentless history. It’s the sea though, the eternal sea that tells us the memoirs of its past hails.

2 thoughts on “Sidon, The History”