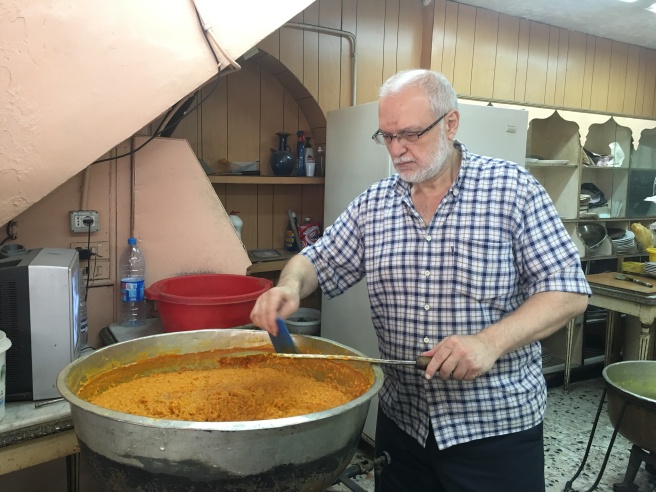 He gets up early, 5:30 sharp to be exact. At 6:00 he opens the doors to his sweet shop in Basta el faw’a to get that fresh air from the slow-waking city. For just a little while, time stands still and he starts his preparation for a day of stirring and cooking allowing him to take in this life with a deep inhale and appreciation of this skill he has perfected over he years.

Hassan l’ Mkere (Makari pronounced the Beiruti way), is the secret holder and guardian of the slow food prized cooking of a sweet called the Moufata’a. The Moufataka is one of the oldest Beiruti desserts combining rice, tahini, pine nuts and turmeric, giving the Moufataka its golden color. He has been in the business stirring moufataka for over 45 years now.

This dessert was only produced and purchased on the last Wednesday of April, when the weather became warmer and the Beiruti families would spend the day at Ramlet el Bayda with their families for the first time since the arrival of the cold. Hassan proudly says as he is stirring his moufataka “nihna kil yom 3ina ekheir 2rb3a min nissein” (for us, every day is the last Wednesday of April).

The preparation of the Moufataka is an art all by itself, learned by a few and perfected by the Makari family. This golden desert takes 2 days of cooking and preparation. On the night before the rice is soaked with water for the next day. The morning after, the rice is cooked with the turmeric until it softens.

After the rice is cooked, it requires hours of stirring the rice with the rest of the ingredients (the tahini, the sugar, and the pine nuts) over fire. It takes around 4 hours of mixing it to bring it to the right consistency, making it a physically daunting task to accomplish. Keeping this in mind Hassan refuses to get any help other then his partner in the shop Khaled Kobrossly, to help him stir this treasured slow food cooking par excellence.

There is an art to figuring out when it is cooked and that is when the serej, the oil that breaks out on its surface, glazes it with the tahini’s rich oil now orange in color due to hours of homogenizing the ingredients together and getting the turmeric to tint this desert with its burnt orange color.

The Makari family has been holding the secret of Moufatta making for generations when the grandfather Hajj Abdallah “King of Moufataka” with his partner Hashem Kobrossli (father of Khaled) opened a sweets shop in Basta serving for the first time in parallel with other sweets this yellow pudding. His son Hassan, after inheriting the shop, decided to concentrate solely on the Moufataka. His great grandfather, a carpenter, owned this same shop before.

Today, the grandson Mohammad proudly carries this tradition and owns a sweets shop in Barbour. Between the father and the son they have managed to rein royally on the sweet business of Ras Beirut.

There is something quiet magical about slow food cooking combined with heritage and a certain excellence in the know how. The Moufataka acquired its name due to the fact that a person cooking it would “yinfiti’2” (herniate) from standing on hours stirring it as the lump of rice develops into a thick pudding, becomes harder and harder to stir. Also the person eating this lump of rice would feel quite full like he is about to “yinfoti2” (please note the Beiruti accent that I love, again to herniate).

It tastes like sfouf (lebanese cake made with turmeric) with the consistency of rice pudding. Heavy with tahini, the first thing you will notice as you are about to eat is the whiff of turmeric that engulfs the mouth and the nostrils before you even start to chew.

More aware now then I have ever been, this busy life will consume us, if we let it. But standing there in this little shop with this 70 year old man cooking in his father’s pots day after day, I realized that all I wanted was a little bit more simplicity in this busy, god forsaken city. For once, just let it be filled with tranquility.

Patience, sometimes the word is hard to even say, is rare in this bustling city. Yet here is a man with patience and love to his craft (yes it is a craft!), enjoying a slow and detailed way of life.

Rushing burns the future to a thin and diluted soup. As we allow the moment, instead, to slowly simmer and cook, we enjoy the spoils of flavor as we follow the steps of Hassan l’ Mkere: Cook, take pride, keep up with tradition, be patient, love, and enjoy this fast short-lived life slowly.

Special thanks to my friend Hala Haidar and her driver Hssein Balhawein, aka Abou el Abed, for taking me there. 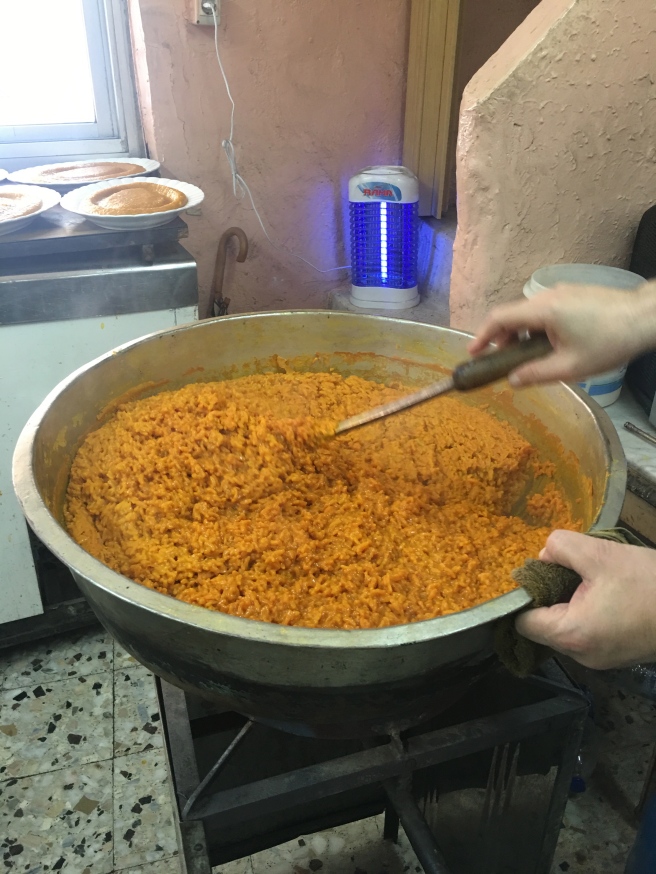 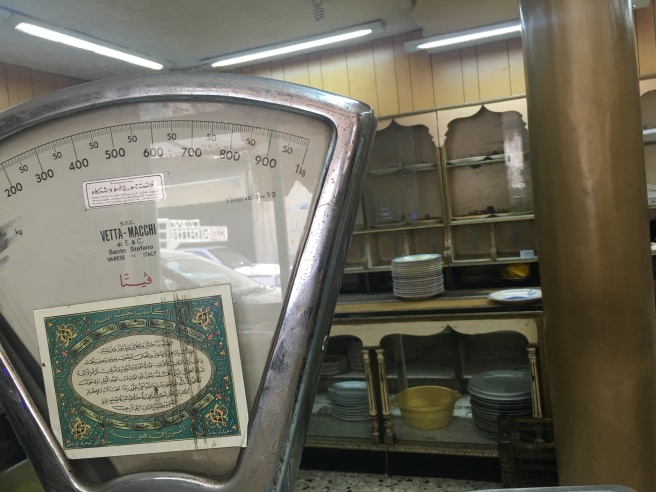 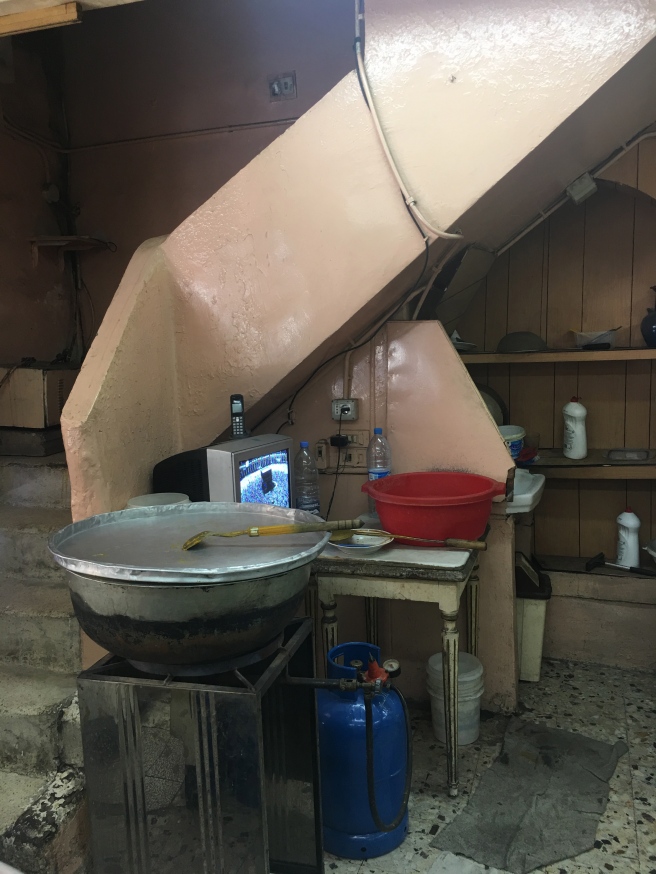 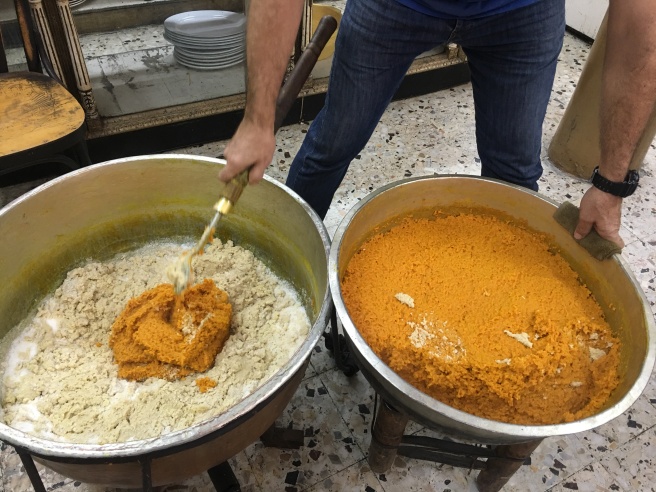 2 thoughts on “The One that Herniates”